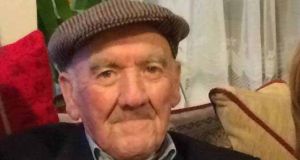 Christy Byrne, who was in his 70s, died at Naas hospital following an explosion as he was being unloaded from an ambulance.

Suggestions that the victim of Thursday’s fatal ambulance explosion in Naas was smoking have been angrily rejected by his family.

The family of Christy Byrne say they are deeply upset by media reports that the incident could have been caused by a cigarette.

In a statement provided to the local hospital group, they say this is “completely untrue”.

Mr Byrne, who was in his 70s and lived near the hospital in Co Kildare, had a tracheotomy a number of years ago and has not smoked since, it is understood.

The second paramedic injured in the explosion and fire in the ambulance at Naas General Hospital was released from hospital yesterday.

The man, who suffered severe head, face, torso and arm burns, was released from the burns unit of St James’s Hospital in Dublin.

The second man, who was suffering from shock, was discharged on Thursday after treatment in Naas.

The two were injured while trying to save Mr Byrne.

Services at the emergency department in the hospital, which were closed immediately after the incident, have returned to normal.

The National Ambulance Service has since ordered a safety check on all oxygen containers in vehicles, and investigations are under way by An Garda Síochána, the Health and Safety Authority and the Health Service Executive.

The review extends to NAS ambulances only, and does not cover ambulances run by private or voluntary organisations, a HSE spokeswoman said.

HSE national director for the ambulance service Damien McCallion said concerns centred on the oxygen supply in the ambulance, which burst into flames.

He said a wider review of oxygen kits has begun and would be carried out on all ambulances in the fleet.

This would take time, he warned, as 170 ambulances are in operation at any time.

More than half the ambulance fleet nationally entered into service since 2015, new figures show.

None of the 264 vehicles in the fleet was registered before 2007 and almost 90 per cent are less than five years old, the figures obtained by Fianna Fáil show.

Some ambulances use new bodies on an existing chassis but the figures provided by the HSE do not indicate whether any of the ambulances have been reconditioned.

“There are still 2011, 2012-reg ambulances on the road with substantial mileage on them, and these must be replaced if the service is to adequately meet the huge demands on it.”

Nasra also backed a call by Siptu for the HSE to carry out a full health and safety audit of the ambulance fleet and the equipment on board.