‘Am I worried about coronavirus? Nah. I just got engaged’ 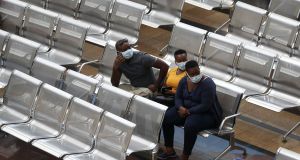 The man behind me in the British Airways queue to board the Johannesburg-Heathrow flight on Saturday evening was shouting. “Stop talking!” he was repeatedly yelling at the young man behind him, who was talking on his mobile. “I am ordering you to stop talking!”

“I’m allowed to talk,” the guy on the phone responded, bewildered.

“Not when you’re breathing all over me!” the man behind me bellowed.

There was a jumpy, weird atmosphere in Johannesburg’s eerily empty ORTambo airport; in normal times, Africa’s busiest. I discovered only when I landed there that the airport was now closed to all but transit passengers. I had gone out to visit friends in Zimbabwe some days before everything started to close down in Ireland; a trip I cut short when it became evident that borders were closing around the world, and airlines curtailing flights.

It took most of a day to move my flight forward by five days; the soonest I could change it to. When one of my friends dropped me to Robert Gabriel Mugabe Airport in Harare on Saturday, he was taken aback to spot several people he knew; all of them repatriating.

The British embassy and the UK’s Department for International Development (DFID) had announced two days earlier they were withdrawing all non-essential staff, as had other embassies and NGOs. For now, my friends, one of whom works for an NGO doing much-needed public health work, are staying.

Tanya Zebroff, who works for the DFID, was leaving, along with her husband Mark and daughter Tashia (17). They had had 48 hours notice to pack up and leave for Vancouver after 2½ years in Harare. All three were wearing masks personalised with colourful cartoon features. “My daughter’s best friend came round at 7am to decorate them. It was her way of saying goodbye to us,” she said.

Zebroff will be working remotely from Canada, as best she can, given she’ll be at other side of the world from her base office. By the time we were leaving, three cases of Covid-19 had been confirmed in Zimbabwe, although the unofficial consensus, due to lack of testing, was that the true number was far higher. “The biggest concern about the spread of coronovirus here in Africa is the lack of a functioning health service,” Zebroff said.

At Johannesburg, everyone who disembarked had their temperature taken. A hand-held gadget was held to my forehead, and I was allowed pass. Staff at passport control were wearing gloves and masks. The shops were open, although customers were few. My hands were sprayed with sanitiser by a staff member before I was allowed enter one of the two cafes open.

John Goodaker, a logistics consultant who lives in Ballyjamesduff, Co Cavan, was travelling back to Ireland en route from Lusaka. “I came out to Lusaka to get engaged to my Zambian girlfriend. My intention is to come out and live here,” he said. “I rented a 50-seater boat for a cruise on the Zambezi river, opened the champagne, and proposed to her. She said yes.”

However, Goodaker then discovered his return flight with South African Airlines had been cancelled. His long journey back to Ireland involved a circuitous self-booked route from Lusaka to Nairobi, then Johannesburg. He still had flights to London and Dublin ahead of him. “Am I worried about coronavirus? Nah. I just got engaged. My only worry was she wouldn’t say yes.”

Utah-based couple, Dave Atkinson and Raynette Williams, only heard about the spread of coronovirus and cancellation of flights when they emerged from safari in Botswana, where there was no connectivity. “We had been due to go on a 29-day cruise from Cape Town to Singapore. We’ve now rebooked flights home three times as various airlines stop flying,” Atkinson said.

My evening flight to London was full; on the way out, this leg had been less than half full. “Everyone is trying to get out before it’s too late,” a woman on the phone in the seat in front of me said before we took off.

At Heathrow on Sunday morning, I was disconcerted to see many fellow passengers in disposable white suits with hoods, masks and gloves. All the sit-down food outlets were closed, with only a couple of takeaway counters operating. The shops were closed. My scheduled flight to Dublin was cancelled. “Not enough passengers,” I was told. On the later flight, the plane was less than a fifth full.

At a virtually deserted Dublin Airport, my phone beeped. “You have no idea what you’re coming back to,” the text read.