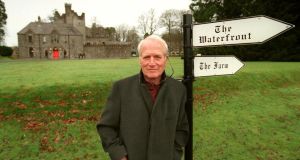 The late Paul Newman at the Barretstown Gang Camp at Barretstown Castle. which he descibed to his family as “a paradise for kids”. Photograph: Frank Miller

Twenty years ago, actor Paul Newman returned to his family in the United States after first seeing Barretstown Castle in Kildare, the place that was soon to become the first European branch of his charity to brighten the lives of sick children.

“I remember him coming back and just saying, ‘You will not believe the property, it is extraordinary. It is a paradise for kids,’ ” said his daughter Clea. “I am only sad that Pop’s not here, but I think he would be really proud of the job that is being done.”

In its first year, Barretstown welcomed 124 children. Since then, 27,000 have come through. This year, 2,500 “campers” will stay for weekends or eight-day visits between March and November.

Most encounters begin with a weekend visit. “Often parents are reluctant to let the child head off to camp themselves. They want to suss it out first, but then they realise that the children are in a very safe environment,” says chief executive Dee Ahearn.

Sick children are the same wherever Newman’s Serious Fun Children’s Network operates, says his daughter. “Whether they are in a state in the US, or in Europe, or in Japan or in Israel, they all feel the same.

“They may look a little different, but they all feel the same. The therapy for the kids and the smiles and the joy and the fun they have is beyond comparison. If you haven’t been you should go – it is the most fun you can have as an adult.”

Barretstown’s alumni includes Aoife O’Brien (21) from Drogheda, who is spending the summer there as a volunteer. “As a sick child with cancer I missed out on the childhood that every child deserved.

“Barretstown stepped in and did something magical. It gave me back the childhood I deserved. I have learned to live in the moment and take each day as it comes,” says O’Brien, who is a primary teacher in Balbriggan, north Dublin.

Karen O’Neill, who is studying medicine in Trinity, is five years clear of cancer. “I first came to Barretstown at 17. It brought freedom, fun, encouragement but most of all confidence to believe in my dreams when I needed it most.”

She too is spending the summer as a volunteer: “It is a humbling experience which allows me to be a part of other children experiencing the magic of camp – better than any dream I could have imagined before.”