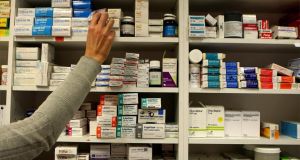 “The potential remains to reduce public spending on pharmaceuticals, in particular patented medicines,” according to the commission’s recommendations. Photograph: PA Wire

The European Commission is standing over a call for Ireland to reduce spending on patented medicines, despite objections from the pharmaceutical industry.

The commission has rebuffed a complaint from the group representing big pharma companies based in Ireland, which claims its stance favouring less State spending on patented drugs is “quite unjustified”.

The industry disputes the findings of the commission. It maintains that, following years of price reduction deals with the Department of Health, the prices of Irish patented drugs are close to the average of similar EU countries. It claims the commission is confusing the price of drugs with spending in the area.

Cutting spending on patented medicines would cause serious risks to the health of Irish patients, restrict the treatment options available for them and deprive them of innovation, the association told the commission representation in Dublin in a letter last month.

IPHA chief executive Oliver O’Connor said the commission had offered no basis for singling out expenditure on patented medicines in Ireland and had not stated what it believed the actual level of spending to be.

The industry and the Department of Health claim to have made cumulative savings of €1.5 billion on the price of all drugs since 2006 through a series of trade agreements. However, spending has remained high due to increased demand and the cost of innovative new drug treatments.