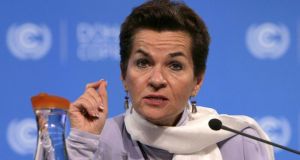 The world’s governments are running out of time to conclude an effective international agreement on climate change by the end of next year, following a relatively fruitless round of UN-sponsored talks in Bonn last week.

The major objective for the meeting was to identify the elements that should be included in this agreement, due to be concluded in Paris in December 2015, and to decide what information countries must provide about what they intend to do.

According to the Washington-based Union of Concerned Scientists (UCS), the Bonn talks “did not make the progress that was hoped for” and had thus left a “very ambitious agenda” for ministers to deal with at December’s UN climate summit in Lima, Peru.

But UN climate chief Christiana Figueres insisted that last week’s six-day session had delivered “fresh clarity on how and what countries will communicate in their Intended Nationally Determined Contributions (INDCs) during the first quarter of 2015.

This was disputed by UCS policy director Alden Meyer, who said: “Unfortunately, we’re leaving Bonn with not much more clarity than when we arrived” – citing “sharp differences” between rich and poor nations over what should be included in the INDCs.

Most developed countries think they should focus largely on actions to reduce greenhouse emissions. However, developing countries believe the new agreement must also include commitments on climate finance, technology transfer and adaptation to global warming.

“Negotiators further disagree on whether and how to assess both the collective adequacy and the individual fairness of countries’ contributions against the agreed goal of holding global temperature increases below 2 degrees Celsius,” Mr Meyer said.

Christian Aid’s Mohamed Adow said the momentum for action evident in the People’s Climate March in New York last month had not been mirrored in Bonn, where “the unusual negotiation process locked governments into restating worn positions”.

Meena Raman, of the Third World Network, said the talks “can’t fairly be called negotiations. They were discussions, sharing of views, but no actual elbows on the table ... I can’t see how they’ll pull the elements together if they continue like this.”

There was also scepticism among civil society representatives about Europe’s pledge to cut emissions by “at least 40 per cent” by 2030, under the EU Climate and Energy Package, agreed in Brussels last Friday, with most believing it doesn’t go far enough.

But Ms Figueres said the meeting had kept the negotiations “on track” for Paris.