When beauty flutters at the kitchen window

A “red list” of Ireland’s threatened moth species finds about 16 per cent of our 500-odd larger moths warranting concern, with seven species in danger of extinction 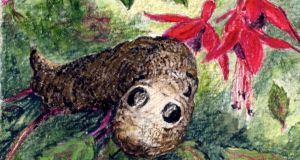 Between the parade of ocean showers the summer air is empty – even the season’s face-flies can’t be tempted out to annoy me. As for butterflies, a rare good day stirs a few speckled woods from the shadows, or launches the flicker of stray, unremarkable cabbage whites. Were there really summers of admirals, tortoiseshells, peacocks, painted ladies, clustered to flower-heads at every promise of nectar?

They will – they must – come again. But are you old enough to remember summer nights, decades ago, when a fast drive in the countryside would light up a glittering blizzard of little wings and leave headlights and windscreen plastered with dead moths by journey’s end?

In his recent book The Moth Snowstorm – Nature and Joy, Michael McCarthy thought it had taken the coming of the motor car to bring home to people the incredible abundance of moths in the natural world. In the UK, where kinds of moth, large and small, still outnumber species of butterflies by almost 50 to one, the night snowstorm is already a lost phenomenon. That I also recall a few nights of such experience, long ago, speaks for the loss of abundance even in Mayo. It is all of a piece with the thinning out of bumblebees, hoverflies and so much else in the insect world.

A “red list” of Ireland’s threatened moth species, just published by the National Parks and Wildlife Service (npws.ie) finds about 16 per cent of our 500-odd larger moths warranting concern, with seven species in danger of extinction. Loss of special habitat and particular plants are the main reasons. The mallow moth, for example, is missing its eponymous food plant from the dwindling wild patches of coast around Dublin. But the thrift clearwing, that lays its eggs among pink thrift, still abundant on the island’s rocky coasts, is also suddenly disappearing; no one knows why.

It’s only lately that, for more and more people awakened to the natural world, the beauty of so many moths has come into its own.

“Moths are often characterised – inaccurately – as being dull,” write the authors of the red list, “and, in the mind of many, they are undesirable and troublesome insects.” Rather, they write, the daytime appearance of many species, “can be a revelation, showing intricate patterning and colours that is at least the equal of the Irish butterflies”.

That’s quite deeply-felt language for a scientific report. The passion that moths can arouse is shared even more freely in On Your Doorstep: Moths and Butterflies of Connemara*, a beautiful and instructive book by an author bursting to spread the vision and the word.

Heather Greer, now retired after a career in professional training, is a keen trad musician on harmonica and lives with her banjo-playing partner, Mary Lovett, on the Aughrus peninsula at the tip of north-west Connemara. She is also an accomplished photographer.

On a mild summer night about 15 years ago she was drawn to the moths fluttering at her lighted kitchen window. She looked at them closely “for the first time”, then fetched a torch and a magnifying glass. She was amazed and enchanted by “the most intricate and beautiful miniature works of art”. This led her to start close-up photography of the day-flying moths and butterflies visiting her garden and fuchsia-lined hedgerows of the local boreens.

The windswept coast of Aughrus, at the last fringe of Europe, would not seem the most promising lepidopteran territory. But On Your Doorstep offers more than 100 rich, often dazzling, portraits of local moths, along with a score of butterflies, most of Ireland’s total

The moths include several spectacular hawkmoths, including the gorgeous, somewhat fearsome pink elephant hawkmoth that succeeds the big “eyed” caterpillar of my drawing (a regular late-summer query to Eye on Nature). There is also Europe’s most westerly portrait of a rare migrant, the death’s head hawkmoth, both as caterpillar and colourful adult.

Quite as fascinating are the rich brocades of moths with wings a mere couple of centimetres long. The colours, textures and patterns have evolved as superb camouflage on leaves or bark, or warn predators of toxicity (the reader’s six-spot burnet in today’s Eye on Nature synthesises deadly hydrogen cyanide from its foodplants).

The new book’s engaging knowledge about its species, and about moths in general, has matured from years of painstaking inquiry and reading. The author had particular help from Moths Ireland, the internet group and database (mothsireland.com) led by Angus Tyner and Eamonn O’Donnell. Both men are enthusiasts whose growing expertise and data-gathering were enlisted for the new red list of threatened species.

Some academic field guides to British and Irish moths can overwhelm the reader with their hundreds of thumbnails of similar-seeming, mostly brownish, specimens.

The large-format gallery in On Your Doorstep is vivid, local and more meaningful. Self-published (Matador, UK) it makes a heavy paperback, at €30, including postage, from connemaradoorstep.com. It is also in Connemara bookshops.