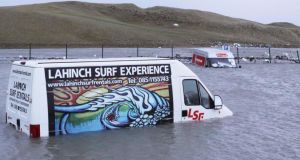 A Lahinch Surf Experience van is submerged in several feet of water at the promenade in Lahinch, Co Clare. Photograph: Press 22

Then nature intervened. A fully equipped van came with a surfing school business he and a business partner had just taken over, and the company had it parked on the promenade in Lahinch, Co Clare as the recent storms blew up.

McCullough’s interest in surfing began over a quarter of a century ago, when he and his family used to holiday in a mobile home in the Doonbeg area of west Clare.

He trained first to be a mechanic and then later a carpenter, qualifying in the 1990s. For several years he mixed work with travel, driving a mini-bus to Morocco and spending time in New Zealand and Australia. As the Irish economy swelled to full tide, he returned and found work plentiful.

Tired of working for other people, he decided to work for himself, but in hindsight he couldn’t have picked a worse time.

Work dries up
“Work had been plentiful and in 2007 I went out on my own. I can remember that the day after Lehman Brothers collapsed, the phone just stopped ringing.

“You’d get a few bits and pieces of work but it would only pay for tax or insurance on the van. I was a father at this stage and I couldn’t leave. After a while, I said to myself I really can’t do this any more.”

So, with a grant from Clare Local Development Company and the Department of Social Welfare, McCullough started a surf safari, converting his work van, adding a small trailer, and bringing surfers to beaches around the Clare coast for lessons.

The business went well – so well in fact that he began to think about expanding and when the opportunity to acquire the Lahinch Surf Experience surf school presented itself last year, he and a business partner decided to give it a go.

Signed the contract
“I had a look at the books and it was doable, so I brought a business partner with me, and we signed the contract on Monday, December 30th. We took a few days off and then couldn’t wait for the new year to get going properly.”

Then the weather deteriorated. “People involved in surfing are constantly watching the weather,” he explains.

“I said to John, my business partner, will we move the van? We both thought that area would never be flooded. I went to Dublin New Year’s Day and came back on Thursday and on my way home the weather was pretty poor.

“The next morning I decided to go up to Lahinch to check on the van. People were telling me I was mad as the area never flooded, but when I got there the van was under four feet of water. We were gutted, as all the gear was inside it.”

Not insured
Fortunately, McCullough managed to salvage most of the surfing gear inside the van, but because the van itself was not insured, his new business suffered a major loss.

“The van can only be used now for storage. It’s a write-off.”

Community spirit is strong among the surfers in Lahinch, and a clean-up of the beach and the playgrounds adjacent has been organised for today.

While McCullough has taken a financial hit he could ill-afford, he remains optimistic about the year ahead, and is hoping the extreme weather in recent weeks means nature now owes him one.

“All I want for the year ahead is sunshine and waves. I don’t think that’s too much to ask for considering the start to the year we’ve had.”

People lighting the fire at home is killing 1,300 a year, EPA says

Graduate employment: getting the right fit 07:39
Navigating a way through a fragile jobs market 07:38
People lighting the fire at home is killing 1,300 a year, EPA says 07:24
Risk of people travelling from Donegal to drink in Derry bars, says Scally 07:07
Graduating in 2020: hiring landscape has changed but opportunities beckon 05:00