A sea eagle in Western Australia has unwittingly created his own movie after stealing a camera from a crocodile trap. Rangers found the camera more than 100 km away from where it been placed, and released the footage captured by the bird. 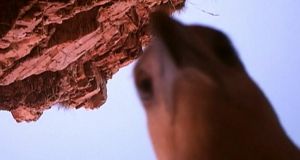 An image taken video recorded on May 29th shows an eagle pecking at a camera that rangers set up along a river to record crocodiles. Image: Reuters

An accidental wildlife video has been shot by a sea eagle which stole a video camera set up in the Australian outback to film crocodiles and carried it for 110kms.

The bird’s wings can be seen as it grabs the device and takes off and the eagle later poses for a selfie by poking its face into the camera lens.

The rangers had assumed the motion-sensor camera had fallen into the water until it turned up several weeks later near the Mary River in Western Australia, over 100kms from its original placing on the Margaret River.

Rangers were able to recover three thirty-second films from the camera.

Ranger Roneil Skeen, said cameras had been moved by animals before but never turned into a “flying camera”.

“Unexpectedly our camera went missing so we thought we had lost it because it fell into the water,” he told ABC News.

“It was pretty amazing… They’ve had camera traps moved [by animals] before, but not taken off, like a flying camera you know?”

The rangers plan to bolt down their cameras from now on, Mr Skeen said.

Rangers had placed the camera at a gorge last May to try and capture images of fresh-water crocodiles.

Mr Skeen said rangers were shocked the eagle flew with the camera on its journey and believed it was a young bird because an older eagle would have dropped it.

“We knew it was a juvenile eagle because the adult sea eagles, once they get their food or their prey, they usually take it right up into the sky and drop it,” he said.

“An adult one would have flown it right up the top and yeah for sure it would have smashed that camera.”