Residents appeal against redevelopment of Irish Jewish Museum in Dublin 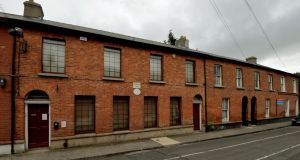 The Walworth Road premises are the last remaining physical evidence of Portobello’s once-thriving Jewish community, which at its peak accounted for up to 80 per cent of the population of the locality. Photograph: David Sleator 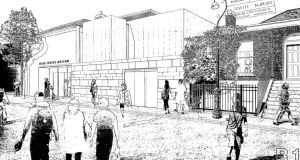 An artist’s impression of the proposed new Irish Jewish Museum in Portobello, Dublin, which would involve demolishing five houses and building a two-storey-over-basement museum incorporating a cafe, synagogue, archive storage and audiovisual theatre. 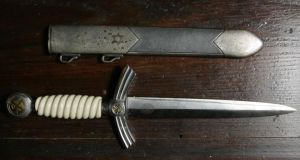 A dagger that belonged to a Nazi officer, and which is on display at the Irish Jewish Museum in Portobello, Dublin. Photographer: Dara Mac Dónaill 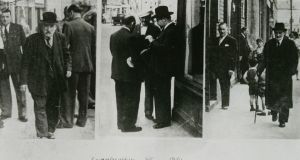 Images of Clanbrassil Street in Dublin in 1950, when it was part of the city’s thriving Jewish quarter, displayed in the Irish Jewish Museum on nearby Walworth Road. 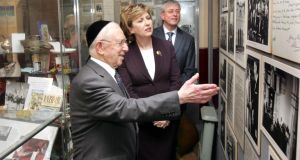 Residents of Portobello are appealing against Dublin City Council’s decision to approve plans for a expanded Irish Jewish Museum on the site of five terraced two-storey houses at Walworth Road.

The proposed development, which is being handled by the Office of Public Works, would involve demolishing the five houses and building a two-storey over basement museum incorporating a café and synagogue.

The new structure would also include archive storage, an audiovisual theatre, toilets and staff area at basement level, more generous exhibition space on the ground and first floors as well as a museum shop and a garden to the rear.

A synagogue was first opened in 3 and 4 Walworth Road in 1916 and was used for regular worship until the early 1970s. With a steep decline in the area’s Jewish population, the two houses were turned into a museum in 1985.

Its mission is to collect, preserve, interpret and present material evidence of the Jewish people’s experience in Ireland and their contribution to Irish society as well as promoting public awareness of the Holocaust.

The Walworth Road synagogue is the last remaining physical evidence of Portobello’s once-thriving Jewish community, which at its peak accounted for up to 80 per cent of the population of this tightly knit part of Dublin.

The three adjoining houses have been vacant for some time, having been acquired for the museum’s future expansion in an area that is zoned Z2 -- “to protect and/or improve the amenities of residential conservation areas”.

‘Character and context’
A total of 25 objections were made by local residents and Cllr Kieran Binchy (FG), mainly on the grounds that the proposed development would be out of scale and “does not respect the existing character and context” of the area.

There are concerns that the proposed museum will lead to a loss of light, overshadowing and adverse visual impact. On-street parking for visitor cars and tour buses were also mentioned in submissions made by residents to the council.

It is proposed that bus/car drop-off points would be provided at the main entrance to the museum on Kingsland Parade. But Cllr Jim O’Callaghan (FF) told a recent public meeting he was “baffled” that permission was granted.

Although most of the objectors said they would welcome a “modest” extension to the museum, there is particular concern that excavations and pile-driving for the 5.5-metre deep basement could destabilise nearby houses.

Referring to the proposal to demolish and reconstruct the synagogue, city council conservation officer Nicola Matthews said this “façadist approach” would mean “removing the authenticity and real experience of the original site”.

While recommending that permission be granted for the reconstruction of all five houses, she said the demolition of such culturally significant buildings “would need to be fully evaluated and a record of made of their fabric prior to alteration”.