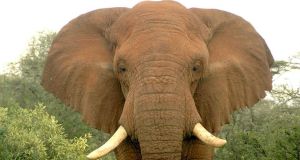 Changila, a male elephant, who was poached outside Samburu National Reserve in Kenya. A new study suggests elephants were killed at a rate of 33,600 per year between 2010 and 2012 in Africa. Image: David Daballen/Colorado State University/PA Wire.

Poaching is inflicting unsustainable losses on African elephants, with more than 33,600 animals killed each year between 2010 and 2012, a study has shown.

Over that period alone an estimated 6.8 per cent of the continent’s elephant population was wiped out by the illegal ivory trade, say scientists.

In central Africa, the worst affected region, poaching led to a 63.7 per cent fall in elephant numbers between 2002 and 2012.

Evidence suggests a strong link between the slaughter, the price of ivory and increasing demand in China where carved ornaments made from elephant tusks are highly prized.

Researchers writing in the journal Proceedings of the National Academy of Sciences suggested that the very existence of the African elephant was threatened.

“Our analysis demonstrates the heavy toll illegal ivory trade is taking on African elephants, and suggests current off-take exceeds the intrinsic growth capacity of the species,” they wrote.

The team led by Dr George Wittemyer, from Colorado State University in the US, began by conducting a survey of elephant carcasses in Kenya’s Samburu National Reserve.

Poaching rates in Samburu were strongly associated with local market price increases for ivory and larger number of seizures of ivory bound for China.

Carcass survey data covering 45 sites throughout Africa were then used to extrapolate these findings on a continental scale using two different statistical methods.

The results showed that illegal killing was most pervasive in central Africa. And while savannah elephant populations in east and southern Africa were relatively stable or growing between 2002 and 2009, they then went into decline.

Overall, the slaughter peaked in 2011 with 8 per cent of Africa’s elephants illegally killed - a total of more than 40,000 animals - leading to a probable species reduction of 3 per cent that year alone.

The researchers concluded: “These results provide the most comprehensive assessment of illegal ivory harvest to date and confirm that current ivory consumption is not sustainable.”

Clonlara case study: ‘Who the hell gave planning down here, day one?’