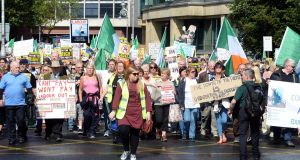 The legal opinion commissioned by the utility company said there was no possibility under European law for the State to suspend or scrap the charges.

It said the State was required under EU law to keep the contentious regime in place.

Despite the advice, Fianna Fáil has insisted it will abolish water charges.

The divisions over water charges are emerging as a potential barrier to the formation of the next government.

Prof Barrett said on RTÉ’s Morning Ireland programme that Ireland could face substantial fines if the EU decided to take action and go through the courts.

“Ireland could be hit with a large fine and then a recurring daily penalty. The fine could be a minimum nominal amount of €1.5 million and the daily penalty could be €5,000 per day minimum,” he said.

Prof Barrett said there were no loopholes in the EU directives and the “established practices defence” did not apply.

“Unfortunately for Ireland we got rid of our no water charges policy in 2013 when Irish Water was set up. Legislation was introduced on water charges and there was widescale installation of water meters,” he said.

“That defence is gone and we now have an obligation and it applies to us the same as to all other EU member states.

“The obligation is there and we must apply it, that is the end of the matter.”

Prof Barrett said Ireland also made the commitment under the bailout programme.

“There are strong incentives, financial reasons to comply with the EU directives. We lost the derogation, we gave it away voluntarily,” he said.

“Our only defence was the ‘established practices’ defence and it doesn’t apply to us any more. There could be some wiggle room on the amounts charged.”

Under the EU water framework directive pricing policies must be introduced which include adequate incentives for customers to use water resources efficiently.

“There has to be an incentive built into any charges to use water efficiently. A flat rate is not in compliance with EU law,” Prof Barrett said.

“Getting rid of water charges is definitely not in compliance with EU law.”