Piece will be placed at Dublin’s Christ Church cathedral

After listening to the Irish Times readers sculptor Tim Schmalz decided on Christ Church Cathedral for the location of the 'Homeless Jesus' statue in Dublin. 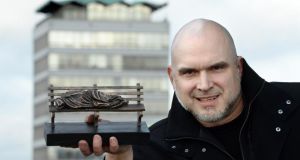 Tim Schmalz with his homeless Jesus Statue which is being gifted to Ireland by a benafactor. Photograph: Cyril Byrne/The Irish Times.

On Good Friday, April 3rd, a controversial sculpture known as “Homeless Jesus” will be blessed and consecrated at Christ Church cathedral by the Very Rev Dermot Dunne.

The 7ft-wide bronze by Canadian sculptor Tim Schmalz is a park bench with a faceless cloaked figure lying on it. Passersby realise they are seeing a statue of Jesus only when they notice the holes in the feet.

“Homeless Jesus” has been presented to the city of Dublin by an anonymous North American Episcopalian benefactor, who is also giving the sculpture to 11 other European cities, including the Vatican City in Rome, where the sculpture has been blessed by Pope Francis.

Dean Dunne said he was delighted that Schmalz had chosen Christ Church as the location for the sculpture.

The competition for the placement of “Homeless Jesus” was launched by The Irish Times in December 2014, when readers were asked to nominate the best locations. Jonathan Corrie, a homeless man, had just died in Molesworth Street, within view of Leinster House.

Readers voted for the statue to be placed on Molesworth Street or on the plinth at Leinster House.

Schmalz, a devout Catholic, visited many locations on a trip to Dublin in January, including Trinity College, and decided on Christ Church because “it is the spiritual heart of Dublin”.

Within the grounds of Christ Church, an area of the park will be landscaped to complement the sculpture.

But Jonathan Corrie’s death on Molesworth street on December 1st and the way in which it galvanised public concern for homeless people coming up to Christmas 2014, did not escape Tim Schmalz’s notice.

The sculptor visited the Lord Mayor, Christy Burke, who was so taken with the idea of a sculpture at Molesworth Street, that – according to Schmalz – Burke will champion the placement of a more suitably sized “Homeless Jesus” at or near Molesworth Street.