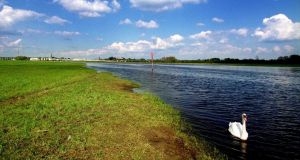 The Dublin region could be facing water shortages for another decade due to delays in rolling out a viable supply network from the river Shannon, a senior council official has warned.

Nightly restrictions affecting more than 1 million people in counties Dublin, Kildare and Wicklow came into force last night due to production problems and will continue until Monday at the earliest.

The restaurant industry has said the shortages will cost it €600,000 a day in the capital alone.

A €500 million water supply project planned for the region aims to pump 350 million litres of water a day from the river Shannon to serve the capital’s drinking water needs for the next 70 years.

The proposal was one of several put forward in a 2006 report commissioned by Dublin City Council from consultant engineers RPS.

The project had been scheduled for completion by 2020 and that date was reiterated in the Dáil in July by Minister of State for Natural Resources Fergus O’Dowd, who said the project was then seven years away. But Adrian Conway, executive manager with the council, said a considerably longer lead-in time was likely.

He added the latest difficulties at the Ballymore Eustace treatment plant “would not be a problem” if the Shannon supply were in place. The Dublin region, which encompasses parts of Kildare and Wicklow, uses about 540 million litres a day, but is only just meeting that demand, with no more than 1 per cent spare capacity.

Senator Darragh O’Brien, Fianna Fáil’s Dublin spokesman, said it was reprehensible that the Government would introduce water charges without a fully functioning service in place.

Metering system
Tommy Broughan, a Labour TD, also criticised the Government, saying its “whole attention is on the establishment of Irish Water and a metering system but this latest debacle shows that water supply in the Dublin region is in serious need of immediate attention”.

Dublin Fire Brigade said there were no immediate concerns in terms of water supply and that contingency plans had been put in place.

However, the Irish Fire and Emergency Services Association appealed to the public to “control and monitor” Halloween bonfires. “There is genuine concern about the pressure that the water restrictions will put on the services over the coming nights,” said the association’s chairman, John Kidd.

Dublin City Council, which is the water authority of the four Dublin and two county councils in the region, said the problem arose at its Ballymore Eustace water production plant in recent days.

A change in water colour and an increase in the number of small particles have severely curtailed processing capacity, and chemists have been called in from the UK to help address the problem.

As a result the city council had announced region-wide restrictions between 8pm and 7am for the next five days with many having no supply at all during these times. The situation will be reviewed daily.