Donegal golden eagles starving and at risk of extinction

Eagles at risk due to ‘uncontrolled burning, turf extraction, over grazing by sheep’ 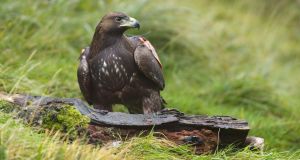 Only two golden eagle chicks were born in 2015 and neither survived more than a few weeks. Photograph: Mike Brown

Ireland’s population of golden eagles is in a “critical” situation and at risk of starving, the Irish Wildlife Trust (IWT) has warned.

The IWT has called on Minister for Agriculture Simon Coveney and Minister for Arts, Heritage and the Gaeltacht, Heather Humphreys to act urgently to save the State’s golden eagle reintroduction project from failure by introducing a Burren-style farming scheme that could improve conditions in the uplands.

The wildlife group warned that time is running out to build a “viable population” of these eagles after the Golden Eagle Trust confirmed there is not enough food in Donegal to sustain the birds.

Only two chicks were born in 2015 and neither survived more than a few weeks. Only one chick survived in 2014.

“Their loss would represent a huge blow to Donegal, not least from the tourism potential that these birds present,” said Mr Fogarty. “Sadly the lack of any management plan for Glenveagh National Park or surrounding ‘special protection areas’, or any conservation measures to protect the eagles is now placing the future of golden eagles in Ireland at threat.”

The IWT warned that the threat faced by golden eagles was a sign of the ongoing decline of upland habitats in Ireland, mainly due to “uncontrolled burning, turf extraction and over grazing by sheep”.

In a Facebook post earlier this month, the Golden Eagle Trust warned that the situation in Donegal was critical and that efforts must focus on improving the habitat conditions of the uplands.

“The Golden Eagle Trust feel that the conditions of the Donegal Mountains can be improved, if there are appropriate management tools in place,” said the post. “It is human actions that have shaped the limited capacity of our hills and we also have the same ability to improve the hills of Donegal.”

The group wrote that the Department of Agriculture holds the “key” to improving the lot of the golden eagles in Donegal, adding that farm policies on upland vegetation was also important.

“Whilst it is true to say that the eagles are not producing enough young in Donegal - that is basically another way of saying that the underlying condition of the Hills in Donegal is not in favourable conservation status,” said the trust. It warned that poor conditions could have “serious implications in terms of European commitments regarding wildlife directives, windfarm planning applications, cross compliance measures of farm payments and forestry applications”.

The group added that climate change may also have an “increasing role to play in annual productivity” of golden eagles.

Golden eagles in Scotland typically eat hares or red grouse but the eagles in Donegal tend to catch crows and badger cubs, indicating the low numbers of their preferred prey, according to the IWT.