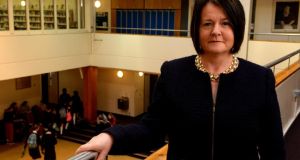 Many Irish parents still choose to educate their children in single-sex environments, despite mixed research findings on the subject, or perhaps because of lack of choice. One third of Irish post-primary schools are single-sex, a higher proportion than is the norm internationally.

One of those schools is Alexandra College, a private all-girls’ secondary school in south Co Dublin. Last week, the principal, Barbara Ennis came out strongly in favour of single-sex schooling for girls, even suggesting the competitive environment in co-educational schools may be detrimental to the social development of young women.

As a teacher for 16 years, and a school principal for the past 11 years, Ennis says she has seen a steady erosion of the sense of self-worth of young women in Irish society.

“I am really concerned about how this is manifested in teenage girls. During the years leading up to the Celtic Tiger, I saw many second-level schoolgirls who were bright and resourceful being more concerned with fake tans, body image and the need to groom themselves to become trophy wives for men, than with themselves as individuals in their own right.

“The excessive concern with looking well, at the expense of being well, is an unfortunate dimension to how girls and young women feel they have to be in the world. This is deeply worrying. Young women are in danger of being reduced to sexual beings, trophies and appendages to men, or to women’s illusions of what boys and men think.”

It is Ennis’s contention that school years are when these attitudes develop, and she suggests that being around boys in the educational environment is part of the issue. She also points to a growing disrespect for female identity in Irish culture.

“I believe that the debasing of girls and young women is not merely an immature by-product of their own school years, but is actually reflective of a growing norm in Irish society. Consider the plots and characterisation, for instance, in the RTÉ TV drama, Love/Hate. There, women were exclusively depicted as appendages to their menfolk, to serve them as either stay-at-home wives or as prostitutes whose deaths did not matter, or as drug couriers. There was not a single strong woman in the whole series.”

We have to look beyond our own screens to Scandinavia and New Zealand, she says, to see women who are represented as equals of men, to series such as Borgen or Top of the Lake.

Ennis says that this generation needs extra protection because stereotyped images of women are coming at them from so many sources via phones, tablets, laptops, televisions, magazines and movies. Single-sex schools can provide that space, she says.

“Our schools provide an environment where we can help our children to find the truth about themselves and their role in society. Girls and boys are different, and their journeys of discovery are along different paths. Within single-sex schools for girls we see a greater emphasis on female education, achievement and self-esteem. In the classroom, girls are not reliant on male approval, they focus more on behaviours than physical appearance, and they participate more actively in class.”

A sense of identity
“Of course girls in single-sex schools continue to interact with boys in their family and social circles, but within the school environment they find a safety net of sorts, allowing them to learn and develop without the distraction of male-female competition. School is one part of a balanced mix of experience, but it may be the only place where girls can debate and understand issues away from the pressure of a mixed-gender group.”

Ennis claims that “research has consistently shown how important an all-female environment is to empowering girls as they grow into young independent women.”

In fact there is research to prove positive outcomes for girls in both kinds of schooling, depending on where you look. The most recent Irish review of research in the area, carried out by Emer Smyth at the ESRI in 2010, found “very little consensus” on whether single-sex education leads to better outcomes for girls or boys.

Nonetheless, Ennis stands over the all-female environment. “We, as a society, need to have a meaningful debate about the destructive dehumanising of our young women and we need to start at the beginning, by looking at what is going on in our schools. We need to consider carefully how we can encourage girls in all our schools to pursue self-knowledge and independence; to pursue a sense of identity based on their own worth and sense of self, and not one dominated by how they are perceived, or how they believe they are viewed, by males.”
The co-ed

Arthur Godsil, director of Godsil Education and former principal of St Andrew’s College, Dublin, takes a different view. He regards single-sex schooling as running counter to principles of diversity and pluralism in Irish society. “The mission statements of our schools consistently proclaim that we aim to prepare our young dmen and women for active and fulfilling roles in society, whether at home or abroad.

“Society is, by its very nature, diverse. If the guiding principles of our schools are to live up to their proclaimed mission statements, it would seem right that we should educate our young men and women for a diverse society and not to educate them for a nonexistent single sex, single religion or single nationality Ireland.”

Godsil is a strong believer in the value of a co-educational environment. He describes it as a more “natural fit” in assisting educators in their most important role of helping to prepare young people for the diversity of life after school.

“It is preferable to have all the children in a family educated at the same school for ease of organisation, for deeper knowledge of the school and for that unique oversight exhibited by older brothers and sisters .

“As always, there will be exceptions and occasionally I have found that on an individual basis there have been students who prefer a single-sex environment.

“But equally, it is my experience that in terms of school transfer, girls from about 15 years of age educated in a single-sex school choose to move to a co-educational school in far greater numbers than boys. In addition, some evidence suggests students from a co-educational environment find the challenge of third-level induction considerably easier.

“When schools employ a personalised, strengths-based, nonjudgmental approach to learning, student performance is maximised regardless of whether the school happens to be single sex or co-educational,” he says. “It is not about single-sex or coeducation; it is about the ability of the school to provide appropriately for each of its young men and young women.”