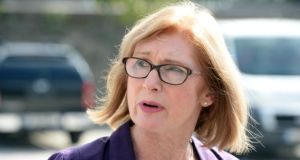 Minister for Education Jan O’Sullivan part of that work would be to examine how to make all schools more inclusive. File Photograph: Eric Luke/The Irish Times

A drive by the Department of Education to divest schools to new patrons was creating “segregation” on on religious and even racial grounds, it was claimed at an Oireachtas committee today.

Senator Averil Power (FF) said there had been “virtually no progress” in divesting schools under reforms introduced by former minister Ruairí Quinn and the plan should now be reconsidered.

Speaking at the Joint Committee on Education and Social Protection, she said the policy of dividing schools between Catholic, Protestant and Educate Together patronage was “going down the wrong road” and leading to “segregation on religious grounds in a way that wouldn’t have had in the past”.

Adding to this criticism, committee chairwoman Joanna Tuffy (Lab) said: “I believe the diversity of patronage approach is leading to segregation of pupils along many different lines, including racial.

“What we are basically doing is dividing all the students up and sending them out to different schools rather than educating them in the local community school.”

Minister for Education Jan O’Sullivan said it was an “ongoing process” but she planned to continue the work of her predecessor Mr Quinn.

Part of that work would be to examine how to make all schools more inclusive, she said.

Meanwhile, the Iona Institute has urged the Minister to “maintain the spirit” of a primary school rule, which decrees that religious instruction is “by far the most important” part of the curriculum.

Dr John Murray, chairman of the Christian campaign group said: “If Minister O’Sullivan merely wants to amend some of archaic language found in rule 68, few would object to this.

However, it is vital that denominational schools still have the freedom to let the whole school day be influenced by their ethos.

“The demand by the INTO that Rule 68 be abolished entirely goes too far. That would represent an attack on the rights of denominational schools.”

He was responding to Ms O’Sullivan’s description of the rule as “archaic” and not reflecting “the reality of today’s primary education sector”.

The Minister has asked her officials to see how it might be amended in the context of patronage reforms.

As well as prioritising religious instruction in primary schools, rule 68 states that “a religious spirit should inform and vivify the whole work of the school”.

Dr Murray, a lecturer at Mater Dei Institute, said: “Denominational schools have a right to their ethos and if that right is compromised, it would severely limit their ability to be truly denominational. This would also be an attack on the right of parents to have their children educated according to their values and convictions, which the Constitution upholds.”