One in five children going to school hungry, charity says 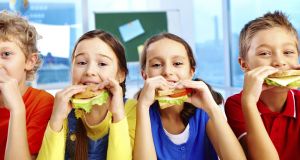 One in five children is going to school hungry because there is not enough food in the home, latest figures show.

However, thousands of children from poorer areas are not able to access a State-funded free meals scheme because their schools have not availed of funding.

Healthy Food for All, a charity dedicated to addressing food poverty, told the Joint Oireachtas Committee on Education on Wednesday that 100 schools in disadvantaged have not rolled out the scheme.

As a result, it said, many children were unnecessarily going to school hungry. This, in turn, was making it difficult for children to participate in class and learn.

It said many of these schools had reported that while funding was available for food, it did not provide for additional costs such as crockery, staffing and modifications to buildings.

Due to recent cutbacks there was no funding within core school funds to meet these costs, the organisation said.

Helen Faughnan, assistant secretary at the Department of Social Protection, told the committee that funding for school meals had increased in recent years despite pressure on public finances.

Some 1,700 schools and organisations were involved in various free meals schemes which benefit about 217,000 children at a cost of almost €40 million.

An additional €3 million was allocated to the programme in last October’s budget 2016, bringing the total allocation next year to €42 million next year.

“There is a particular focus on the provision of breakfast clubs within the programme, which provide very positive outcomes for vulnerable children in terms of their school attendance, punctuality and energy levels,” she said.

She said analysis undertaken with the Department of Education showed the the majority of schools in disadvantage areas were participating in the school meals scheme.

A high percentage of schools participating were from the some of the poorest areas of cities and towns, indicating that it was targeting the most educationally disadvantaged pupils in the State.

The Irish Primary Principals’ Network, however, said the lack of national strategy to guide developments was a major issue and resulted in a “fragmented” approach to delivery of school meals.

“The current system has resulted in ad-hoc provision whereby there are different models of provision, different levels of funding, inequities, lack of clear guidelines and confusion,” the network said, in a statement.

It called for new targets to ensure no child goes hungry in school and that every child in a disadvantaged school has access to a healthy breakfast and lunch.

The IPPN said one Government department should be responsible for developing, implementation and monitoring a national strategy.

In addition, a specific civil servant should have responsibility for this issue at the primary school level.

Latest figures indicate that about 600,000 in Ireland are living in food poverty, which is defined as “the inability to have an adequate and nutritious diet due to issues of affordability and access to food”.

Children from the lower social classes are more likely to report going hungry and are less likely to consume vegetables twice or more daily .

In a survey of 600 principals conducted in 2013, one in five primary school principals reported an increase in children coming to school hungry.