We need to depoliticise our police force 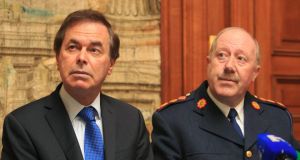 Minister for Justice Alan Shatter and Garda Commisoner Martin Callinan speaking about the report of the Smithwick Tribunal in Dublin. Photograph: Gareth Chaney/Collins

The finding by the Smithwick Tribunal that at least one member of the Garda Síochána most likely colluded with the IRA in the killing of two members of the RUC in 1989 will shock many people. Judge Peter Smithwick also said the Garda was a force in which “loyalty is prized above honesty” – not only then but also now.

We expect our police to hold a level of respect for officers in other countries that would make such actions unthinkable. We also view that period of policing in Ireland as one in which the members of the Garda were in conflict with the IRA, constantly policing them an in effort to undermine and weaken their efforts.

In that context the thought of gardaí aiding the IRA makes us recoil. A natural reaction is to focus our disgust and disappointment on the individual members named by Smithwick, foul apples in an otherwise decent barrel.

Indeed, Minister for Justice Alan Shatter hinted at this on Tuesday, after the publication of the report, when he stated, “I have no doubt that the brave men and women of An Garda Síochána down through the years would be as appalled as anyone that any member of the force would betray them and the Irish people by offering assistance to terrorist organisations.”

Judge Smithwick invites us to confront an alternative reality: that the police do not operate in some isolated space but do work that is intricately woven into the political fabric of our society. “The culture of failing adequately to address suggestions of wrongdoing, either for reasons of political expediency or by virtue of misguided loyalty, has been a feature of life in this State.”

Police work continually intersects with political interests. What is problematic is when those political concerns affect, or dictate, how policing operates. Judge Smithwick’s findings challenge us to confront the extent of political involvement in Irish policing.

My own research into those who policed the Border during the conflict shows that police work in that region was inherently political and that gardaí were all too aware of the potential ramifications of any task they performed.

Those political interests were complex: some governments sought to find a balance in responding as necessary while not compromising republican ideals. This could leave gardaí in a difficult position. Proactive policing of the IRA was not always desired politically and could also provoke retaliation from the IRA. One retired garda I spoke with had had his home petrol-bombed while he, his wife and their child slept, because he attempted to investigate criminal behaviour by a member of the IRA.

Work on the Border was intensely dangerous, and conditions were dreadful. Political support in these times largely came in the form of not pursuing accountability, a feature of Irish policing that can be traced back to Éamon de Valera’s approach in power.

We have as a society begun to accept that there is reason to question the ability of the Garda to maintain appropriate standards of behaviour or to hold its members to account. This approach is not disloyal to the force but simply encourages a healthy critique of a powerful State institution in which significant powers over citizens are vested. What Smithwick pushes us to consider is the extent to which these internal issues are at the very least compounded by the politicisation of policing.

There were many allegations of police misconduct toward members of paramilitary groups during the course of the Troubles, most notably the assertions about the existence of a “heavy gang”. Amnesty International has attempted to draw attention to these allegations, but the Government has not investigated.

That could be viewed as a political unwillingness to criticise the Garda, given the extreme challenges faced at the time. Alternatively, we could question the extent to which politics contribute to those actions.

That political concerns could override due process and a dedication to legitimate methods of policing is linked to the structures of police governance in the State.

Ireland has a heavily centralised governance structure within which the Garda Commissioner is directly answerable to the Minister for Justice. This is a remnant of the colonial structure of the Royal Irish Constabulary, when policing was politics, centred on suppressing those who might seek to challenge British rule in Ireland. In other countries, including the UK, police chiefs are answerable to independent bodies and power over policing is separated, to limit political influence.

This is not the first time that concerns about this arrangement have been vocalised. Judge Morris repeatedly expressed disquiet about the relationship between the police and the Department of Justice. The Garda Síochána Act 2005 strengthened political control over the police, however. This legislation enables, for example, the Minister to demand any document from the Garda in relation to any case.

The policing of the IRA and the Border and the events documented by the Smithwick and Morris tribunals expose the impact of the politicisation of policing. But we should not assume that those impacts are limited to that type of policing. We should be increasingly wary.

Dr Vicky Conway is a senior lecturer at Kent Law School and author of Policing Twentieth Century Ireland: A History of An Garda Síochána and The Blue Wall of Silence: The Morris Tribunal and Police Accountability in the Republic of Ireland