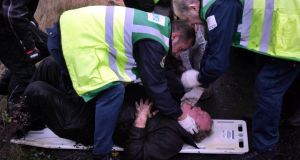 A man injured during protests against Shell’s inland gas refinery at Bellanaboy, Co Mayo, in November 2006 is removed by ambulance. Photograph: Eric Luke.

The Queen’s University Belfast academic who exposed the South Yorkshire police handling of the 1989 Hillsborough football stadium disaster has supported calls for a full review of the policing of the Corrib gas project in north Mayo.

Criminologist Prof Phil Scraton says international concern about Garda handling of opposition to the gas project reflects a belief that it has “moved beyond a series of specific incidents to something of much greater institutional consequence”.

He considers that the policing of the gas project from late 2006 merits a non-statutory review of all available documentation, which could be a prelude to a full statutory inquiry.

Prof Scraton was a member of the British government-funded Hillsborough Independent Panel, headed its research and was primary author of its report.

This documented how South Yorkshire police reviewed and altered the statements of their officers following the Hillsborough disaster in which 96 people died.

He told The Irish Times the Hillsborough model could be applied to investigate Corrib. This model has also been adopted by families of 11 people killed in August 1971 by British soldiers of the Parachute Regiment, he noted.

“The Hillsborough panel had access to all documentation released by the South Yorkshire police, the force responsible for policing on the day,” Prof Scraton said. “Whether the Garda Siochána would release its files is another matter.”

“Relative to a full public inquiry, which hears primary evidence from individuals supported by full legal representation, the review process is relatively inexpensive,” he said.

Should the findings provide the basis on which to proceed further, as in the Hillsborough case, a more focused level of investigation and inquiry then develops, he said.

Ms Darcy has said possible future strategies for an inquiry into Corrib policing could range from submission of a case to the Irish Human Rights Commission to submissions to UN human rights bodies. Residents had exhausted all available means of redress, including complaints to the Garda Síochána Ombudsman Commission, she has noted.

Last year UN Human Rights Commission special rapporteur Margaret Sekaggya called on the Government to investigate all allegations of intimidation, harassment and surveillance in the context of the Corrib gas dispute.