Temple Bar Cultural Trust to be wound down

Dublin City Council to decide how to develop area 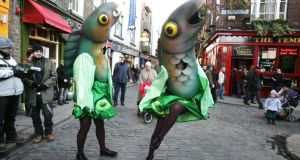 Members of Buibolg theatre group from Wexford in Temple Bar for the annual Trad Fest.


The board of Temple Bar Cultural Trust (TBCT) has decided to wind down the company and leave it to Dublin City Council to decide how the area’s “unique cultural identity... can continue to be developed”.

This follows the resignations of artist, councillor and activist Mannix Flynn and Irish Theatre Institute director Jane Daly from the board, as well as the abrupt resignation of chief executive Dermot McLaughlin from his secondment to Derry UK City of Culture.

At a board meeting yesterday, the remaining directors considered the 2011 report by Latitude consultants on the trust, which recommended the company be wound down and its functions taken over by the council.

The council’s press office said the board had considered the report “at the request of the shareholder” – city manager John Tierney, who will be leaving office tomorrow to take over as the first chief executive of Irish Water.

“The board acknowledges the achievements of TBCT, but the time has come for reinvigoration of what was the cultural remit of TBCT.

“ In that context, the board recommends to the shareholder that a process of winding down the company should be initiated.”


Meeting
The meeting was attended by Mr McLaughlin and other senior staff as well as acting chief executive Ray Yeates, who is the city council’s arts officer.

Last week, the trust’s board commissioned an independent investigation of a city council audit report, which found serious cor- porate governance failings in the company; this is expected to proceed in tandem with the “winding down” process.

“TBCT is over. They’ve realised it’s a vehicle that’s unfit for this road,” Mr Flynn said.

Management of the trust’s property portfolio, which generated most of its €1.8 million income in 2011, is expected to be transferred to the council.

Cultural events in the area would then be run by the council’s arts section.