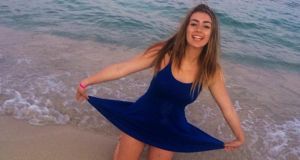 Gardaí are expected to interview friends Ana Hick was socialising with and those in her company when she collapsed. Central to that inquiry will be efforts to establish if the teenager sourced drugs and, if so, from whom.

A Garda investigation has begun after a teenager from south Dublin who collapsed outside a night club in the city centre died yesterday.

The 18-year-old has been named locally as Ana Hick from Dalkey. She had been a student at Loreto College in Dalkey until her recent graduation and died at the Mater Hospital in north Dublin.

Gardaí said an exact cause of death had not been established.

Toxicology tests, which can pinpoint drug use, are expected to inform the postmortem.

Garda sources said the results of such tests would be required before it could be determined what drugs, if any, Ms Hick had taken.

However, gardaí believe the consumption of drugs was a factor in the teenager’s death and are trying to establish if she sourced ecstasy-type tablets.

It is understood Ms Hick was in the Twisted Pepper music venue on Middle Abbey Street, Dublin on Friday night and took ill on the street outside in the early hours of Saturday.

An ambulance was called and took the teenager to the Mater. However, despite efforts to save her she remained seriously ill over the weekend and was pronounced dead at the hospital at about 5.30pm on Sunday.

The Twisted Pepper released a statement saying it was working closely with the authorities on the case.

“Everyone at the Twisted Pepper is deeply saddened and devastated at the news of the sad passing of Ana Hick.

“Our thoughts and prayers are with Ana’s family and friends at this tragic time.

“We are working closely with the authorities and, out of respect for Ana and her family, we cannot comment further at this time.”

While the direction of the Garda inquiry will only be known when the results of the postmortem are available, gardaí from Store Street station are investigating the matter.

They are expected to interview the friends Ms Hick was socialising with and those in her company when she collapsed. Central to that inquiry will be efforts to establish if the teenager sourced drugs and, if so, from whom.

It understood she was due to celebrate her 19th birthday on Tuesday and that she had just completed her first year of college.

The death of the teenager has been described as a “total tragedy” by Minister for Justice Frances Fitzgerald.

Ms Fitzgerald was asked in relation to the case on Monday if she had any information from An Garda Síochána.

“That case is under active investigation. And obviously it’s a total tragedy,” she said.

“I won’t comment on the reasons for the death at this point because it is very actively under investigation.”