Irish woman one of three allegedly held for 30 years 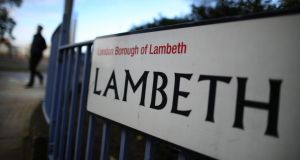 A man walks near a road sign in Lambeth, London, today. British police have reported that three women who have allegedly been held for 30 years as slaves in a house in the Lambeth area of south London have been freed. Photograph: Peter Macdiarmid/Getty Images

Three women, including one Irish, held for 30 years against their will in London endured a “life of invisible handcuffs”, subjected to beatings and lack of freedom, a senior Metropolitan Police officer has said.

The women were rescued last month from a house in Lambeth in south London, but police only yesterday raided the property and arrested a couple in their late 60s, who have been questioned and released on bail until January.

Detectives are still struggling to put together the lives of the three victims since the 1980s, Commander Steve Rodhouse told journalists in Scotland Yard at lunchtime, warning that it could take weeks and months to do so.

The rescued women have thanked the Freedom Charity for helping them – the organisation called by the Irishwoman who rang them after watching a documentary about forced marriages.

Detective Inspector Kevin Hyland said the women had been beaten on occasions, but they had endured lives of oppression and domination – though the house in which they were held is “unremarkable”.

Commander Rodhouse said the couple now being investigated were arrested in the 1970s, but he refused to identify on what charges and whether they were prosecuted, or convicted.

Det Insp Hyland defended the lack of information being released, saying that he had a responsibility “to keep the trust” of the women, who were rescued on October 25th.

The founder of the Freedom Charity, Aneeta Prem said today that she met the three yesterday: ““They’re quite traumatised ... but they’re very relieved to be out.When I met them, it was a very humbling experience.

“They all threw their arms around me, and apart from crying enormously, they thanked the charity for the work Freedom had done in saving their lives,” said Ms Prem, who has been praised by the Metropolitan Police.

They now face “a very long journey” to rehabilitate the women – the Irishwoman is 57, the Malaysian is 69, and a 30-year-old Briton. Today, police are refusing to say if the latter is related to the couple arrested.

“If you have spent your entire life in captivity and know nothing different, then even the smallest freedoms, the smallest things, you have no knowledge of. It’s going to be a difficult process.

“Bear in mind these ladies have left with absolutely nothing at all. The charity is going to have to try and help and support them through this difficulty journey,” said Ms Prem, who added that other victims will now come forward.

The two suspects bailed after three women were alleged to have been held as slaves for 30 years were previously arrested in the 1970s.

They were arrested yesterday on suspicion of immigration offences as well as in connection with the investigation into slavery and domestic servitude, Scotland Yard said.

The case came to light after one victim told a charity she had been held against her will in a house in London for more than 30 years.

The victims — a 30-year-old British woman, a 57-year-old Irish woman and a 69-year-old Malaysian woman — are being looked after in a safe location.

Police said the two suspects have been in the country for “many years”, and said the case “so far is unique to us”. It was described as a “complicated and disturbing picture of emotional control over many years”.