Deaths in Mayo, Cork, Longford and Belfast, injuries at motorcycle race in Coleraine 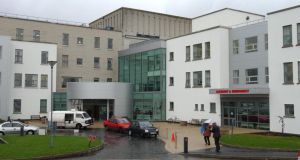 Margaret Burke (49) suffered fatal injuries on Saturday after she was struck by a car while out walking in Castlebar. She was taken to Mayo General Hospital (above) but was later pronounced dead. Photo: Keith Heneghan.

Four people died over the weekend in what was one of the worst for deaths on Irish roads so far this year.

The deaths occurred in Mayo, Cork, Longford and Belfast, and two people remain in a critical condition following a crash at the North West 200 motorcycle race in Coleraine, Co Derry.

Margaret (Maggie) Burke (49), a mother of four, suffered fatal injuries in Co Mayo in the early hours of Saturday morning after she was struck by a motorist while out walking in Castlebar.

She was taken to Mayo General Hospital but was later pronounced dead. A section of the N60, Castlebar to Claremorris road was sealed off for a forensic examination and gardaí are appealing for witnesses.

He was later pronounced dead by a local doctor who attended the scene before being moved to Cork University Hospital for a post-mortem. There were no other injuries.

Also on Saturday, a 36-year-old male driver was killed in Edgeworthstown, Co Longford when his car collided with a minibus carrying 14 children and two adults at approximately 11.10pm.

A female spectator remains in a critical but stable condition in Belfast’s Royal Victoria Hospital after she was hit during a crash involving three motorcycles at the North West 200 event in Coleraine on Saturday.

She was airlifted to the Royal Victoria Hospital, where one of the riders, Stephen Thompson, also remains in a critical condition.