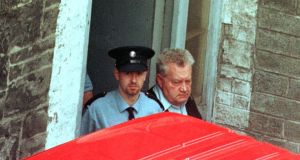 A Stg £25,000 payment made to a man who sued in the Northern Ireland courts over being sexually abused as a child over years by paedophile priest Fr Brendan Smyth was a “full and final settlement” and the man cannot bring a fresh case here against a Catholic Bishop, the High Court has been told.

The Bishop of Kilmore, Dr Leo O’Reilly, has asked the court to stop the man suing him, in his representative capacity as Bishop of Kilmore, over alleged failures by the diocese and Catholic Church to stop Smyth’s abusive behaviour.

The man insists he is entitled to sue on grounds including that a previous Bishop of Kilmore, Dr Francis McKiernan, was allegedly made aware in 1975 that Brendan Smyth was abusing children but failed to report that to the gardaí or the man’s parents.

It is alleged that a young boy had, at meetings in 1975 with priests of the Catholic Church, told the then Fr Sean Brady -  now Cardinal Sean Brady — that Smyth was abusing children.

That boy was asked to sign a document stating he would not tell anyone else about the abuse except authorised priests, Liam Reidy SC, for the man, said. While that boy had reported that the boy was among the children being abused by Smyth, and had provided a name and address, no steps were taken to either inform the Garda or his parents, counsel added.

Bishop McKiernan had directed the Norbertine Order to ensure Smyth remained in their abbey but that directive was not obeyed and Smyth continued to abuse children, counsel said.

The case here involves a different set of facts, including the failure “to have the ordinary decency” to report Smyth’s abusive behaviour to the gardaí and the parents and thus avoid the continuing suffering of the boy and his sister, who was also abused by Smyth, counsel said.

The President of the High Court, Mr Justice Nicholas Kearns, today began hearing an application on behalf of Bishop O’Reilly to halt the action being taken against him by the man. The judge will later deal with similar applications by the Bishop in proceedings brought by the man’s sister and by another woman .

The man has sued Dr O’Reilly, in his representative capacity, and Cardinal Sean Brady, in his personal capacity over his role as part-time secretary to Bishop McKiernan in 1975 during the investigation of complaints about Smyth.   He alleges there was failure by various representatives of the Catholic Church over years to monitor and supervise Brendan Smyth and a failure to stop his abuse or report it to the Garda.

Cardinal Brady has not applied to have the cases struck out against him and the application before the court relates only to Bishop O’Reilly.

Rossa Fanning, for Dr O’Reilly, said his argument was that, despite the “very sympathetic” facts of the case and his client’s sympathy for the man, it would be an “appalling spectre” for litigation generally if the court did not grant his application.  The diocese of Kilmore has very limited resources and is facing other claims, he said.

His argument was that the Northern Ireland settlement was a full and final settlement of all claims arising from the abuse by Smyth, including claims against the diocese of Kilmore and the Catholic Church, counsel said.  The NI case had been taken against Smyth himself, the Norbertine order and then Cardinal Cahal Daly as representative of the Catholic Church, counsel said.

Mr Reidy argued the man was entitled to sue on grounds including that, when he had settled the NI case in 1998, it had been concealed from him that the then Bishop of Kilmore was aware in 1975 of Smyth’s abuse. He had not sued the Bishop of Kilmore in the Northern Ireland case but would have done so had he been aware of all the facts, counsel said. The man claims the 1998 settlement indicated no intention to discharge the defendants from the claims in the current proceedings.  He had received legal advice at the time he had no case against Cardinal Brady’s predecessor, Cardinal Cathal Daly and the settlement of the Northern Irish cases did not represent the full monetary value of his injuries, it is alleged.