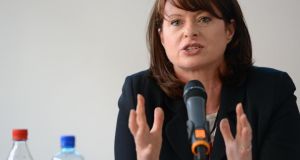 Emily Logan, Ombudsman for Children: Judge Alan Mitchell has instructed the guardian of the children in question to refer the case to Ms Logan and Hiqa. Photograph: Eric Luke / The Irish Times

The Ombudsman for Children and Hiqa are to be asked to investigate why the Child and Family Agency left children in State care without an allocated social worker for over three months this year.

At a family law court sitting in Ennis, Judge Mitchell said it is “a matter of serious concern and unacceptable” that the children have been left without an allocated social worker from February of this year until now.

The judge said he has requested the guardian ad litem – who provides an independent voice for children in family law proceedings – to refer the case to the two agencies as there was insufficient reason for the non-allocation by the agency “and the court finds this practice was not in the best interests of the children and may have adversely affected the children”.

A senior social worker with the agency told the court she shared Judge Mitchell’s concerns in relation to the children and similar cases where children have been left without an allocated social worker describing the situation as “scandalous”.

Judge Mitchell adjourned the case for six months to review it at that time.