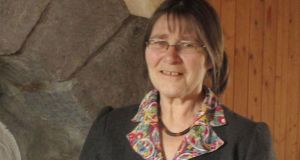 Dr Micheline Sheehy Skeffington of NUI Galway: a long-serving and widely published lecturer who missed out on promotion in 2009 after a process described by the tribunal as “ramshackle”.

A botanist at NUI Galway has said she has “struck a blow for all female academics” after the Equality Tribunal found she was discriminated against on gender grounds when she was overlooked for a senior lectureship.

The tribunal has instructed NUI Galway to promote Dr Micheline Sheehy Skeffington, a long-serving and widely published lecturer who missed out on promotion in 2009 after a process described by the tribunal as “ramshackle”. The university must also pay her €70,000 and review its appointments system.

The tribunal found that while on paper the promotion appeared to be a fair process based on definitive criteria, in practice it fell short. There was only one woman on the seven-person interview board. Of 17 promoted to senior lecturer for the whole university, only one was a woman.

There was no training for interviewers and no pre-meeting to discuss candidates or questions, while the suggestions of the external interviewer – the only panel member who was an expert in Dr Sheehy Skeffington’s field of study – were ignored. “Worryingly, one candidate [male] promoted was not even eligible for the competition,” the tribunal said.

Dr Sheehy Skeffington, a lecturer in the school of botany since 1990, had complained that three successful male candidates had significantly less than the minimum requirement of contact hours with students and yet got a higher score than her under the interview’s “Teaching and Examining” heading.

The tribunal also pointed out that no candidate had supervised more PhDs to completion than Dr Sheehy Skeffington. In its response to the complaint, the university emphasised the high standard of applicants. However, the only candidate who did not have a PhD came first in the competition.

NUI Galway said a weakness in Dr Sheehy-Skeffington’s application was that she did not have articles published in the highest-impact journals. However the tribunal found that “a cursory look” showed the same was true of many of the successful candidates.

The university’s own statistics show that male applicants have a one in two chance of being promoted to senior lecturer while women who apply have less than a one in three chance. These and other factors left the tribunal satisfied that Dr Sheehy Skeffington had established a prima facie case of direct discrimination and NUI Galway had failed to rebut it.

Reacting to the decision, Dr Sheehy Skeffington said she had “struck a blow for all female academics” and that Irish universities would now be forced to address their “shocking discrimination” against women in promotion to senior academic posts.

NUI Galway said it accepted unreservedly the decision and would take immediate steps to act on its findings. It also apologised for the distress caused to Dr Sheehy Skeffington.