Money woe one reason behind rise in domestic violence cases 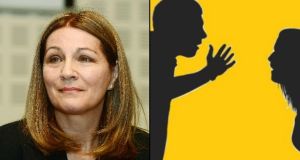 President of the District Court Judge Rosemary Horgan said people are finding that they cannot really afford to pursue a separation or divorce and are staying together in “very strained and difficult circumstances”.

Judge Rosemary Horgan said that people are finding that they cannot really afford to pursue a separation or a divorce and so are staying together in “very strained and difficult circumstances”.

Their situation can become fraught and it can spill over into domestic violence and they end up before the courts.

“I think we are not over the results of the recession,” she said, while discussing the Courts Service annual report published recently. It showed a 6 per cent increase in domestic violence applications to the District Court last year.

Judge Horgan said couples are confronted with the cost of housing, and the cost of rented accommodation, and find themselves continuing to live together when “they are already parted in their minds”. This can lead to disputes over how they are raising their children and other matters.

She noted that of the almost 700,000 cases that came before the courts in 2015, approximately 93 per cent came before District Court, which are run by 63 judges. “We are a very busy court.”

Asked if the workload was putting the court under excessive pressure, she replied that the figures show how busy the District Courts are. “Other than saying that there is an awful lot of work for very few judges, I don’t know if I can make any further comment.”

The judge said she very much welcomed the fact that the media were now reporting on family law cases. The cases are held in camera, or in the absence of the public, and the individuals involved are not identified.

“It is extremely important that people understand what happens in in camera courts. These are not secret courts. The administration of justice needs the disinfectant of [being reported] while at the same time people accessing the courts need to know that their privacy and anonymity will be guaranteed.”

She said the level of care needed in protecting people’s identities while reporting on family law has to be very high, as often the children involved will try to identify coverage of their own cases.

“The current system strikes a proportionate balance between the citizen’s right to know what is happening in in camera courts and the individual’s right to privacy.”

There was a 10 per cent increase in child-care applications in 2015, to 10,215. Judge Horgan said the Children and Family Relationships Act 2014 gave the voice of children a status in guardianship, custody, and access matters and some cases can involve up to 12 children being affected, with the children being born to different parents. While the children’s views can be represented by way of reports to the court from professionals, most of the families involved cannot afford solicitors, let alone professional reports. The statistics in this area of the courts’ work belie the complexities involved, she said.

On the use of the poor box by the District Court, the judge said it can be a very useful “disposal option” in appropriate cases. She gave as an example a minor offence by a young person on whom the judge might not impose a conviction.

The judge said she “fully supports” new rules on how bail applications that have been refused at District Court level can be appealed. The new rules, whereby the applicants have to swear their own affidavits, rather than have them sworn by their solicitors, were introduced by the President of the High Court, Mr Justice Peter Kelly.

Some solicitors have said the procedure can increase the time accused persons are in custody. Judge Horgan said she did not believe the High Court would stand over a “disproportionate delay”.

1 Irish tourists excluded from visiting Greece as country begins its tourism season
2 Quarantine will cease within fortnight, Ryanair CEO claims
3 Patience wearing thin as three parties crawl towards a government
4 Covid-19: Pupils may be kept apart in groups and pods when schools reopen
5 Microsoft sacks journalists to replace them with robots
Real news has value SUBSCRIBE