Majority of callers to local radio station yesterday expressed anger with council, saying the people of Sligo would have to foot the bill 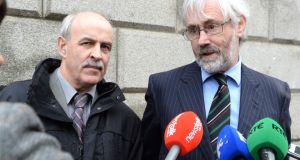 The owners of Lissadell estate have been urged to reopen the historic property to the public following yesterday’s Supreme Court ruling in their favour.

Sligo County Council expressed disappointment with the judgment and pledged to “hotly” contest the costs issue .

The judgment got a mixed reaction locally, with supporters of both sides asking why the issue had to go to court given the massive financial implications, and with the council struggling with debts of €80 million.

A majority of callers to local radio station Ocean FM expressed anger with the council, saying the people of Sligo would have to foot the bill.

One local Fine Gael councillor, David Cawley, said the best case scenario was that the council would have to pay half the costs and “even that could tip us over the edge”.

His party colleague Joe Leonard, who in 2008 proposed that the county development plan be amended to include a provision for the “preservation of public rights of way” on the estate, said he respected the decision of the Supreme Court .

Mediation
Asking why mandatory mediation was not part of the legal process, Mr Leonard said the local community had shown “extraordinary focus and solidarity ...and hopefully the ultimate resolution will be positive for all parties”.

Local resident Jim Meehan, who knew the Gore-Booth family, said he felt “sadness” but he added that Lissadell had a long history and this was just one moment in it. Wishing the owners well, he said “there is no rancour here”.

Minister for Small Business and local Fine Gael TD John Perry described it as “absolutely wonderful news”, adding that it had been “a travesty” to see one of Ireland’s premier tourist attractions closed.

Labour Senator Susan O’Keeffe said she was glad the issue had at last been decided. She “implored” the owners to reopen the estate to the public in advance of celebration in 2015 for the 150th anniversary of the birth of WB Yeats.

Joe Cox, president of the Yeats Society, said his opinion had always been the outcome would be “a lose-lose situation” but he hoped now that the family’s rights had been vindicated that Lissadell could reopen.

County manager
Acting county manager Dorothy Clarke said the council had done everything it “reasonably” could to achieve a resolution in advance of court proceedings, including proposing the appointment of a mediator.

“All its proposals were rejected by the owners who made it clear that they wanted the issue dealt with by the courts.”

The council said its overriding concern in defending the proceedings had been to safeguard the public interest .

The council’s solicitor, Dermot Hewson, said it would “hotly” contest the costs issue.

Keep Ireland Open said the ruling showed legislation was needed to provide reasonable and responsible access to the countryside, in line with other EU countries.