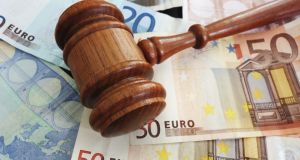 Legal tender: Kerry offenders contributed some €883,527 in 2014, which represented 40 per cent of the total sum contributed to court poor boxes across the State. Photograph: Thinkstock

Cash will no longer be accepted in a Co Kerry district court from offenders who are ordered to pay into the court’s poor box.

Those making contributions will now have to use a cheque or postal order, Judge James O’Connor said yesterday.

Sums of cash are regularly brought into courts in Killarney, Tralee and elsewhere in District Number 17 to fulfil undertakings to the court poor box in lieu of conviction, or to lessen their severity for minor or first-time offenders.

Hundreds of euro are regularly offered in court and in more serious cases up to €2,500 may be volunteered.

The cash is counted out to the court clerk during court sittings.

The amount of money taken in at sittings has sometimes led to a garda accompanying the court clerk to their cars because of fears over their security.

Kerry offenders contributed some €883,527 in 2014, which represented 40 per cent of the total sum contributed to court poor boxes across the State. The money is then given to charities.

Judge O’Connor, who presides over the district, told Killarney District Court that in 2016, “no money in cash” will be accepted in court for the poor box.

It was unfair on court clerks to have to deal with cash during court sessions, he said.

Solicitors in Kerry courts will now have to apply for specific adjournment dates or they will be refused an adjournment, which the judge said was aimed at alleviating the work of the court clerk searching for court dates.

Warrants will also have to be filled out exactly and completely by gardaí who arrive in courts in Kerry, requiring only the necessary signatures, Judge O’Connor said, adding that he was “sick and tired” of gardaí coming into court with unfinished warrants.