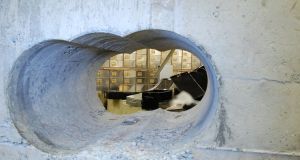 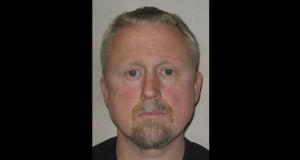 An undated arrest photo of Hugh Doyle after it was handed out by London Metropolitan Police. He received a suspended sentenced of 21 months for his role in the multi-million pound Hatton Garden robbery. File photograph: Metropolitan Police/Handout via Reuters 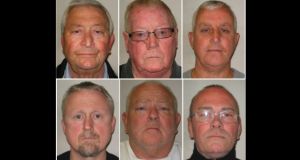 Top, left to right, are Terry Perkins, John Collins and Daniel Jones, who were sentenced to seven years in jail after previously pleading guilty to conspiracy to commit burglary over the Hatton Garden raid. Bottom left to right are Hugh Doyle (suspended sentence); William Lincoln, who received a seven-year sentence, and Carl Wood, who received a six-year sentence - both were convicted of conspiracy to commit burglary, and conspiracy to conceal, convert or transfer criminal property. File photographs: Metropolitan Police/AFP/Getty Images

Plumber Hugh Doyle (49), a Dubliner, with a London address at Riverside Gardens, Enfield, was found guilty of concealing, converting or transferring criminal property between January 1st and May 19th last year.

He was jailed for 21 months, suspended for two years, at Woolwich Crown Court on Wednesday.

Five other men involved in the safety deposit box raid have been jailed for up to seven years.

The gang, with a combined age of 448, carried out the “sophisticated” and meticulously planned break-in over the Easter weekend last year.

Less than a year after the audacious raid, however, six of the seven men convicted in connection with the burglary were sentenced at the court.

Collins, Jones and Perkins were each given seven-year prison terms.

Jones and Perkins said “Thank you” to the judge as they sat down, with other members of the group reassuringly patting one another on the back.

Carl Wood (59), of Elderbeck Close, Cheshunt, Hertfordshire, and William Lincoln (60), of Winkley Street, Bethnal Green, east London, were found guilty of the same offence and one count of conspiracy to conceal, convert or transfer criminal property, after trial.

Lincoln was also given a seven-year sentence, and Wood was jailed for six years.

Sentencing the men, Judge Christopher Kinch QC, said: “The burglary of the Hatton Garden Safe Deposit vault in April 2015 has been labelled by many - including some defendants and advocates in this case - as the biggest burglary in English legal history.

“Whether that assertion is capable of proof, I do not know.

“However, it is clear that the burglary at the heart of this case stands in a class of its own in the scale of the ambition, the detail of the planning, the level of preparation and the organisation of the team carrying it out, and in terms of the value of the property stolen.”

Casting aside sentencing guidelines, Judge Kinch said: “In my judgment, this must rank among the worst offences of its type.”

He added that the sentencing guidelines were “simply not designed with a case of this scale in mind” and that “nothing other than the maximum sentence permitted by law for anyone conspiring to take part in this exceptional case” would be appropriate.

Refusing the Crown’s application for the imposition of criminal behaviour orders (CBOs), Judge Kinch continued that “bearing in mind the relative mature ages of the defendants”, he was not satisfied they were necessary.

A statement released on behalf of Doyle said he had lodged an application for permission to appeal against his conviction.

As he left court, Doyle was asked how he got caught up in the conspiracy.

He said: “I’ve known Ken [John Collins] for quite a few years, and it is literally ... just got sucked into it. It’s just one of those things.

“I feel sorry for the victims for what’s happened because people’s lives have been devastated here.

“I’m sorry for any inconvenience.”

Renewing an appeal for information about missing thief “Basil”, Det Supt Craig Turner, head of the Met’s Flying Squad, said: “The individual known as ‘Basil’ remains unknown. We believe he let the group in and possibly disarmed the alarm.

“Basil is still wanted in connection with the burglary, and we would ask anyone who has information as to the identity of ‘Basil’ or the whereabouts of the outstanding jewellery, to contact police.

“We are offering a reward of up to £20,000 for information leading to his arrest and conviction and the recovery of the outstanding property.”

Valuables worth up to £14 million, including gold, diamonds and sapphires, were taken. Two-thirds of them remain unrecovered.

The gang ransacked 73 boxes at Hatton Garden Safety Deposit after using a drill to bore a hole into the vault wall.

They will be sentenced for their roles in the conspiracy on March 21st.

Reader’s case will be listed for mention on the same day.