Mitchell Pettett (21), from Melbourne, was diagnosed with leukaemia while on holiday in Ireland 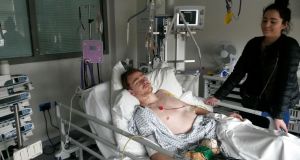 Mitchell Pettett with his girlfriend Abby Morris in the Mater Hospital in Dublin. Photograph: Bryce Pettett

Gardaí, hotel owners, and taxi drivers in Dublin came together to help a young Australian man stranded in Ireland after he was diagnosed with leukaemia while on holiday.

Mitchell Pettett (21) from Melbourne and his girlfriend Abby Morris saved for 12 months to take a two and a half month tour of Europe, beginning in Dublin.

They arrived in Ireland on July 22nd. However, their travel plans were derailed when Mr Pettett fell ill and was taken into the Mater Hospital.

“I was expecting it to be a stomach ulcer that popped or kidney stones or something like that because it was stomach pain. Then they told me they thought I had pancreatitis and I’d never be able to drink again and I was bummed out about, I’m in Ireland and I can’t drink” said Mr Pettett. “But then it got worse and worse and I found out I had leukaemia”

Mr Pettett was feeling ill before he left Australia but after consulting with doctors and undergoing numerous tests, he was cleared to fly.

Mr Pettett’s father Bryce Pettett is a detective senior sergeant in the Melbourne police and once he got word of the situation he took the next available flight to Ireland.

Police associations in Melbourne contacted their Garda counterparts to try and help the family as much as possible.

Garda ­ Greg McGovern, Garda Gareth Norton and Inspector Anthony Gallagher from Mountjoy Garda station stayed in contact with the Pettett family and helped where they could.

“During this time the gardaí­ have been sensational, they’ve taken me to a local footie match,” said Bryce Pettett. “I’m a Dublin supporter now, and I had the opportunity to go up in the helicopter.”

During their time in Dubin, the family have been staying in the Castle Hotel off Parnell Square. When the owner Fionn McCumhaill found out about their situation, he allowed them to stay there for as long as they needed without charge.

“The comfort and support we experienced from the Castle Hotel, Fionn McCumhaill and all the staff and been just sensational, they are aware of our situation and they’ve really made our journey a lot easier” said Bryce Pettett.

According to Bryce Pettett, several taxi drivers also refused to take money for the trip when they heard about his situation.

He said one driver showed particular kindness when Mitchell’s mother Ann, who had also travelled to Ireland, went out to get her son something to eat. When the taxi driver learned of her son’s situation, he drove her to Burger King, paid for the meals and returned her to Mater Hospital, all free of charge.

Mitchell Pettett, who had a short window of opportunity between treatments to get home, flew back to Melbourne on Thursday morning, where he is now in hospital for the next phase of his treatment.