Irish are biggest users of illegal psychoactive drugs in EU

Ireland accounts for 5% of all ecstasy seizures, according to Europol report 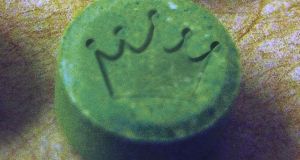 Irish teenagers and young adults are the biggest users of illegal psychoactive drugs in the EU, according to a new study.

Irish teenagers and young adults are the biggest users of illegal psychoactive drugs in the EU, according to a new study on the drugs trade.

The EU Drug Markets Report 2016, published by Europol, has also highlighted the presence of international crime gangs in Ireland and says some Irish criminals are also significant players in the international context.

Comparing ecstasy seizures globally last year, it said Ireland accounted for 5 per cent of all seizures.

It also found 8 per cent of respondents to its survey on drug use in EU states had used psychoactive substances at least once.

An average of 3 per cent had used the substances, sold in headshops as legal highs until they were banned.

“The highest levels of use in the last year were in Ireland (9 per cent), Spain, France (both 8 per cent) and Slovenia (7per cent),” according to the survey of people aged between 15 and 24.

About 3 per cent of users had bought the substances online.

However, the report says because the drugs were known by different names across the EU, and because users may have taken them without realising they were psychoactive, it was difficult to determine real patterns of use in an internationally comparative context.

The report also says Vietnamese gangs have been active in cultivating cannabis crops and assisting others to do so.

Garda sources have long believed that Vietnamese and some Chinese nationals are centrally involved in the cannabis grow house scene, with the crops often of a much higher potency than cannabis products traditionally offered for sale.

This is achieved by adding specialist feeds to the vast quantities of water needed to grow the plants.

The report also suggests some Irish gangs now have a global reach and says Irish criminals are dealing directly with major cartels at the point of drugs production rather than buying via a middle man, as was formerly the case with Irish crime syndicates.

Man pleads not guilty to charges of rape, attempted rape, and sexual assault