Heart of Glasgow stills to sadness as Karen Buckley mourned

‘There is sorrow over the waters for one of Ireland’s daughters and from Glasgow to Cork, we all share your pain’ Marian and John Buckley, the parents of Karen Buckley, stand with their son Kieran (left) during a vigil for Karen in George Square, Glasgow. Photograph: Jane Barlow/PA Wire. 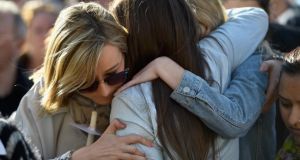 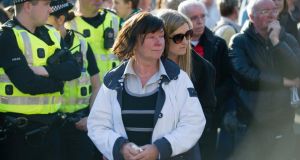 Marian Buckley (centre front), the mother of Karen Buckley, is comforted as she joins hundreds of mourners at a vigil for her daughter in George Square, Glasgow. Photograph: Jane Barlow/PA Wire.

It was the busy Friday rush hour but, on an evening of brilliant sunshine, the heart of Glasgow stilled to sadness and reflection as local people and visitors gathered in George Square to mourn Karen Buckley.

Hundreds descended on the elegant sandstone square - men, women, young couples, mothers with babies in buggies, pensioners - touched by the tragedy which has dominated the media in Scotland this past week and wanting to show their support for the Buckley family.

Former member of the Scottish Parliament Rosie Kane organised the candlelit vigil and, as she said herself, it was “cobbled together”. But, if the event had an ad hoc feel to it, it was no less powerful as raw emotion filled any lulls in proceedings.

“You see a girl goes missing and you hope and hope and hope that she comes back. Then you see her parents on TV and you can see their pain.

“So gathering here just seem like the right thing to do and people want to come and send their love to the family,” said Ms Kane.

“The whole place has been in mourning for the past week and we just want to say to Karen’s mum and dad and her brothers, ‘Glasgow took your daughter but we want you to feel safe and at peace here’ and we hope we have coloured in a little of the darkness with flowers and love and hope.”

A piper, Craig McFarlane played a haunting rendition of Amazing Grace as dozens of women, some of them crying, came forward with floral tributes, candles and homemade cardboard signs to express their sorrow for what had happened to the young Cork woman in their city.

Derry-born Glaswegian Pauline Bradley was so moved that she composed a song for Karen.

“There is sorrow over the waters for one of Ireland’s daughters and from Glasgow to Cork, we all share your pain,” she sang, the simple lyric resonating with the crowd.

Retired Cork Institute of Technology lecturer Barry Ahern and his family came down from Ayr for the vigil. After singing the Cork anthem, The Banks of My Own Lovely Lee, he explained why: “We just feel a connection with the Buckley family, being from Cork - our hearts go out to them.”

The welcome Glasgow has had for generations of Irish people over the decades was evidenced by pensioners Bridie Brady from Ballylongford in Co Kerry and Bridie McDaid from Lismore in Co Waterford, both of whom came to Glasgow in the late 1950s and settled in the city.

“We’ve been here over 50 years now and Glasgow has become a much safer city over the years. Back then, there were gangs everywhere but it has become safer and then this happens - it’s heartbreaking for her poor family and that’s why we are here,” Ms Brady said.

Tom McGarvey sang a chillingly beautifully Danny Boy, with Scots and Irish alike joining in as the air soared and dipped.

“When I came here over 20 years ago, I was around Karen’s age. Glasgow has been good to me and given me the chance to lead a happy life and have a family here, but she never got that chance.

“I didn’t know her but I don’t think you had to know her to feel the sadness of her loss.”