Report looks at Connolly Hospital, in which 65 gunshot patients were treated in 10 years 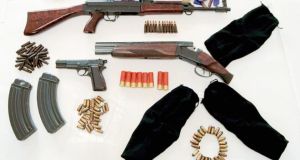 Gun-related crime in Ireland places a burden on hospital services, according to the Irish Medical Journal (IMJ). Photograph: Crispin Rodwell/Reuters

The “sharp increase” in gun crime over the past decade is placing a burden on hospital services, according to the Irish Medical Journal (IMJ).

The latest IMJ report shows that gangland violence, particularly in west Dublin, has led to a “dramatic increase” in the number of “high velocity wounds” and gun-related deaths in the capital.

The study found that 65 patients with gunshot wounds were seen at Connolly Hospital in Blanchardstown between 2001 and 2010. This compares to a 1985 report at a Dublin hospital which found only 21 gun-related injuries in the previous decade.

Only one of the 65 patients in Blanchardstown was female, while 29 said they were unemployed and 10 came from the travelling community. It also reveals eight of these patients died in the emergency department.

Dr Ian Murphy, co-author of the report, said that despite being well-prepared for gun-related traumas, doctors and nurses in emergency departments find gun injuries “very stressful”. He added that staff rotation makes it difficult for doctors to develop the necessary experience to deal with gun-related injuries.

“Doctors who rotate through Blanchardstown could see four or five gunshots in a year. They become quite experienced with the drama of it but then they move on and don’t see a gunshot injury for another four years. Every year there’s novices coming in.”

The report attributes the rise in gun-related deaths to an increase in gangland activity and the illegal drug trade. It found that victims shot with handguns and other high velocity weapons, such as rifles and semi-automatic weapons, were much more likely to die than those injured with shotguns – a mortality rate of 43 per cent compared to 6 per cent.

Victims injured by high-velocity weapons tended to be hit in the torso, head and neck, while those injured with shotguns were often hit in the legs and other “peripheries”.

The average age of gunshot patients has lowered from 31 to 27 years over the past four decades.

Dr Murphy, who worked as a surgeon at Connolly Hospital from 2006-07, says the younger age-group is most likely related to Ireland’s illegal drug trade. “It’s a young man’s game and they’re getting younger and younger.”

The report argues that despite the marked increase in firearm related injuries, the number is still quite low in Ireland when compared with other developed nations.

“I think our gun-licensing laws will always moderate the numbers compared to those in America or in non-EU countries,” he said.

A Garda spokesman said the force had established crime units, drug squads and detective units based in west Dublin. He said the 2012 murder rate in the area was still quite low at 1.7 per 100,000.

“North central Dublin would have a high crime level as well, as do parts of Dublin south central – high on Irish terms,” he said. “This is a low crime jurisdiction, people just don’t realise this.”