Criminals convicted of serious offences to have DNA taken 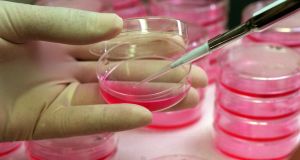 Criminals convicted of serious offences and most suspects detained in connection with serious criminal investigations are to have their DNA profile added to a new national database.

Under a draft law published today, gardaí will be empowered to take biological samples in the form of mouth swabs or hair follicles from offenders convicted of a serious crimes and suspects held in relation to offences that carry a sentence of five years or more.

The database will include the genetic profiles of offenders entered on the sex offenders register on or after the day the law comes into effect, as well as crime scene profiles from unsolved crimes.

It will be operated by the Forensic Science Laboratory at Garda Headquarters in Dublin, which already routinely does DNA testing for the force. Minister for Justice Alan Shatter said the data would be held on purpose-built software supplied by the FBI to agencies around the world.

The software, called Combined DNA Index System (CODIS), is used in 40 countries, including 18 EU member states, and was installed in the Forensic Science Laboratory in 2012.

“The intelligence generated will be invaluable to the Gardaí in relation to identifying prolific offenders involved in volume crime such as burglary but also in relation to serious offences against the person, such as homicide and sexual offences,” Mr Shatter said.

“It will contribute to the move towards more effective, targeted and smarter policing and will also facilitate cooperation with other police forces in relation to mobile criminals.” He also pointed out that the database would be of benefit in establishing the innocence of individuals suspected or wrongly convicted of offences.

The Bill states that suspects under 14 years may not be sampled for the database. Neither can “protected persons”, defined as those who do not have the capacity by reason of a disability to understand the nature or effect of the taking of a sample, or who cannot indicate their consent. However, both groups may be sampled where this is necessary to prove or disprove their involvement in a particular offence.

The Bill states that samples taken from individuals will be destroyed as soon as the profile has been generated or within six months - whichever is the later.

In relation to people who are not proceeded against or are not convicted, the Bill includes a presumption in favour of the removal from the database of their DNA profiles, subject to the Garda Commissioner having the power to authorise retention on the database where he is satisfied that this is necessary.

A statutory test is set out by which the commissioner will make this decision, which can be appealed. The retention periods allowed will be 6 years in the case of adults and 3 years for children.

The arrangements governing the retention of samples taken for evidential purposes include a presumption in favour of destruction of the samples relating to suspects who are not convicted, subject to the Garda Commissioner having the power to authorise retention for 12 months (which will be renewable) where he is satisfied that this is necessary. Again, this decision will be appealable.

The DNA profiles of people convicted of serious offences will continue to be held on the database indefinitely.

The Bill includes a number of safeguards in relation to the taking of samples. For example, the procedure is to take place “in reasonable privacy” and must be explained to an individual before it is carried out.

Where reasonable force may be used to take a sample, it requires prior authorisation of an officer of at least Superintendent rank. Its use must also be observed by a senior person who has responsibility for determining how many officers are required, and must be electronically recorded.

Mr Shatter said he was determined to ensure that the database would be ready for use as soon as the legislation was enacted. To make this happen, the laboratory has been given funding for new specialist staff and to allow for the purchase and installation of new equipment.