The Commercial Court: where dark corners of economy dominated the dock 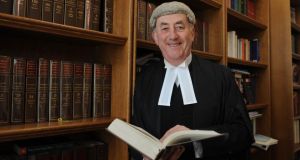 Mr Justice Peter Kelly: as he departs to the new Court of Appeal, there is widespread agreement on the Commercial Court’s efficiency

When the new fast-track Commercial Court was set up a decade ago, the aim was to radically change the litigation landscape to achieve speedy determination of business disputes. Mr Justice Peter Kelly, on taking the court’s helm at a time of apparent economic boom in 2004, could never have envisaged a first decade dominated by the catastrophic consequences of a collapsed property bubble and global financial crisis.

It has heard of property and other deals involving misappropriation, forged signatures, deceit, lies and secret profits; suspect property and money transfers aimed at avoiding repayment; exorbitant expenses for senior bankers; and slipshod and questionable loans, investments and valuations.

It has also shown existing laws provide limited opportunity to penalise some of these practices and revealed gaps in legislation on corporate crime, including the absence of an offence of reckless lending.

It was set up primarily to resolve commercial disputes where more than €1 million must be at stake. Practically all Commercial Court cases get a trial date within five weeks of entry into its list. That is achieved via judge-managed litigation with strict application of short deadlines for exchange of legal documents, costs penalties for delays and rules effectively ending trial by ambush.

While some complain the “frontloading” of costs makes the court prohibitively expensive for smaller litigants, others believe the speedy resolution of cases may ultimately result in the same, or even lower costs, than under normal High Court procedures. The State has also benefited from fast resolution of disputes over public contracts and licences.

After a slow start in 2004, when applications for entry to the court’s list were just 46, the caseload soared due to the economic collapse. Its work increasingly became focused on debt recovery with financial institutions suing over loans totalling billions.

Few could have anticipated judgment for more than €2 billion being obtained against Seán Quinn or Sir Anthony O’Reilly, another one-time billionaire, consenting to a judgment against him for €22 million.

Senior Counsel Cian Ferriter, an experienced commercial lawyer, says the court is widely considered “an undoubted success”. There are fewer debt recovery cases now because most big money debtors have been pursued, he believes.

A lengthy list of not-so-well-known defendants alongside many household names underlined the extent of the collapse.

Many veritable unknowns had substantial judgments entered against them, including shopkeeper Jim McConnon, against whom a €32 million judgment was entered over an unpaid loan from Zurich Bank Ireland for a supermarket in Castleblayney.

He claimed he got the loan despite never having engaged in any developments and the bank, State and others should “take some responsibility”.

The rejection of such arguments revealed important lacunae in corporate law, his lawyers argued.

The cases of many sued for smaller sums ranging from €1 million sometimes best underlined the human misery involved. In May 2010, two Co Galway men, unable to afford lawyers, consented to judgments of about €3 million each over loans to build houses.

“I went in there three years ago with no debts at all and we never thought it would come to this,” Martin Fox said.

Barrister Jarlath Ryan says: “One of the awful consequences of the recession has been ordinary people like guards, civil servants and teachers being summonsed by large financial institutions on a Monday morning. Judge Kelly has always treated them with courtesy and compassion.”

Some smaller claimants, especially in cases of financial negligence, have had claims upheld by the court, Ryan noted.

It is true the financial institutions have not had everything their own way.

Various institutions are being sued over alleged mis-selling of various financial products. Some auditing firms are facing actions over alleged auditing failures, stockbrokers and solicitors have also been sued and several actions were brought over foreign property investments.

While judgments totalling billions have been obtained against hundreds of hapless debtors, it seems the prospects of more than a fraction of those being repaid are slim.

Banks, and now the National Asset Management Agency, frequently return to court looking to set aside property transfers to debtors’ wives and relatives and even for jailing orders in efforts to have judgments paid.

Amid all this debt recovery, standard commercial disputes have continued. Pop star Prince was sued over a Croke Park concert that never happened and the Dubliners litigated over a CD box set. Music companies pursue cases over downloading while telecommunications companies battle with each other and the regulator.

Some believe Ryanair should have its own court, such is the number of cases it is involved in.

An increasing number of multinational companies have successfully applied to the court to relocate here to avoid tax liabilities in their home countries.

Cases involving Nama and, to a lesser extent, State-owned IBRC now take up a lot of the court’s time.

The highest-profile case yet to come is the Quinn family’s action against IBRC and others next April aimed at avoiding liability for €2.34 billion loans to Quinn companies.

Preparations are also continuing for IBRC’s action against Michael Fingleton and others over massive losses at the Irish Nationwide Building Society.

As Mr Justice Kelly departs to the new Court of Appeal, there is widespread agreement on the court’s efficiency.

However, with serious delays continuing to plague other courts’ lists such as the High Court asylum list and family law hearings in the lower courts, some wonder why fast-track litigation is reserved for business.

Noeline Blackwell of the Free Legal Advice Centres believes lessons can be learned from the Commercial Court on improving access to justice.

“In the Commercial Court, they can demand resources by showing there is big money at stake but those principles are perfectly applicable elsewhere.”

No other court list gets the judicial resources provided to the Commercial Court “and yet the list has not made anything like a commensurate contribution to jurisprudence in the State or to the public interest”, Maguire believes. “The commercial list is all about private money and our laws should not permit private money to skip the judicial queue.”