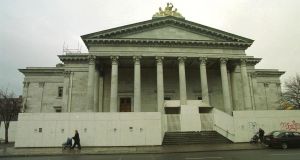 Ted Cunningham has been given a five-year suspended sentence in relation to the money-laundering offence. Photograph: Alan Betson/The Irish Times

A 65-year-old financial advisor has been given a five year suspended jail sentencing for his part in money laundering around STG£275,000 of the £26.5 million stolen in Northern Bank robbery in Belfast almost 10 years ago.

Cunningham pleaded guilty to money laundering £100,040 on January 15th, 2005 by transferring it to John Douglas in Tullamore, Co Offaly and in do so being reckless to it being the proceeds of the Northern Bank robbery.

He also pleaded guilty to money laundering £175,360 on February 7th, 2005 by transferring it to John Sheehan in Ballincollig, Co Cork and receiving three cheques totalling €200,000 and again in do so, being reckless as to it being the proceeds of the Northern Bank robbery.

Today, Insp Colm Noonan outlined the background to the case when an armed criminal gang identified as being the IRA, held up the Northern Bank cash centre at Donegall Square West in Belfast on December 20th, 2004 in what was the biggest bank robbery ever on the island.

The gang had posed as PSNI officers when they called to the home of Northern Bank employee Kevin McMullen and threatened him and his wife at gunpoint.

They took her hostage and ordered Mr McMullen to comply with their directions when opening the cash centre.

“It was an extremely sophisticated operation involving the use of firearms, a large number of personnel over a 24 hour period and it is the view of those investigating the robbery that it was carried out by the IRA,” said Insp Noonan.

In the weeks after the robbery, members of An Garda Síochána in Cork and elsewhere began tracing the movement of sterling in the Republic and investigating the movements and activities of criminal subversives in the Cork area.

Three people were arrested at Heuston Station in Dublin in February 2005 with £94,500 and further investigations led gardai to Cunningham who was being utilised by the criminal subversive gang because of his involvement in financial affairs.

Insp Noonan said that Cunningham may not have been aware of the identity of those who carried out the Northern Bank raid but he displayed a recklessness with regard to the origin of the money that he gave to unsuspecting business people.

During Cunnigham’s trial, the court heard that he had arrived at the home of the Douglas family in Tullamore and asked them to mind two bags of sterling each containing £50,000, which the family later gave to gardai when they called to them.

Cunningham also gave £175,000 in £20 notes to businessman John Sheehan in Cork in return for three chequest totalling €200,000, which Mr Sheehan loaned to him. But upon learning of a raid on Cunningham’s house, Mr Sheehan handed over the money to gardai.

The court heard that Cunningham had begun working for a sub-prime lending company called Weisz Finance run by American Ron Weisz in the early 1990s but later set up his own company in 1999 called Chesterton Finance based in Ballincollig in Co Cork.

Chesterton Finance is still operating today and Cunningham had recently rejoined the company as a financial director. Judge Sean Ó Donnabháin said that was something which caused him considerable concern.

Cross-examined by defence counsel, Hugh Hartnett SC, Insp Noonan said gardaí accepted that Cunningham had no involvement in subversive activity but had been utilised by criminal subversives because of his financial experience and business contacts.

The court heard Cunningham had been convicted of 10 counts of money laundering in 2009 arising out the same investigation and relating to a much larger sum and he was sentenced to 10 years but he was released after three years after he successfully appealed his conviction.

While he was in prison, Cunningham was taken to hospital on 16 separate occasions as he suffers from a condition called heriditary haemorragic telangiectasia which led to frequent nose bleeds and made his time in prison very difficult, Mr Hartnett told the court.

Mr Hartnett asked that the court would not impose a custodial sentence given Cunningham’s age, his health, the fact that he already had served three years prior to his appeal plus his guilty plea and his willingness to resign from Chesterton Finance.

Judge Ó Donnnabháin said the Northern Bank raid had displayed all the viciousness, planning, methodology and organisation of a criminal terrorist organisation and the crime had received extensive media coverage all over the island of Ireland.

He noted an excerpt from a conversation between the late Jack Douglas and Cunningham in which Mr Douglas asked him if there was any chance that the sterling he was being asked to mind was from the Northern Bank raid and Cunningham assured him that it was not.

He paid tribute to the professionalism, tenacity and rigor of the Garda investigation which led them to identify notes found at both the Douglas home and the money handed over by Mr Sheehan through various marks as being from the Northern Bank cash centre.

And he noted Cunningham’s guilty plea to the charges which were a clear acknowledgement of his part in money laundering: “It puts his involvement beyond all doubt and all from out of his own mouth - there are no appeals, there is no doubt anymore.”

Cunningham had used his position as a financial advisor to inveigle unsuspecting business people into this plan to launder the proceeds of a serious crime and that was a serious aggravating factor in his mind, said Judge Ó Donnabháin.

He said he had concerns that Cunningham was still involved in financial matters through Chesterton and that could have a bearing on what type of sentence Cunningham would get but Mr Hartnett assured him Cunningham would give up his role in the company immediately.

Judge Ó Donnabháin said he was pleased to hear that from the point of view of protecting the public and he imposed a five year sentence from today which he suspended on condition he be of good behaviour and have no involvement in any financial company for five years.

He also ordered the forfeiture to the state of a total £2.985 million and €45,000 which gardaí seized from Cunningham and other people during the course of their investigation into the laundering of monies stolen in the Northern Bank raid.