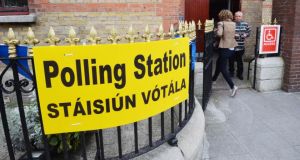 Two men have sought leave to appeal the result of the marriage referendum to the Supreme Court. Photograph: Alan Betson/The Irish Times

Two men have sought leave to appeal the outcome of last May’s same-sex marriage referendum to the Supreme Court after their previous court challenges to the result were rejected.

The Supreme Court office on Thursday received two applications for leave to appeal in the cases, the Courts Service has confirmed.

At the end of July, the three-judge Court of Appeal dismissed two separate applications for leave to bring petitions challenging the result of the referendum.

It rejected arguments by Gerry Walshe, an electrician, of Lisdeen, Co Clare, that he had established the necessary grounds to bring a petition.

The court also found Maurice J Lyons, a gardener, of Callan, Co Kilkenny, had no basis entitling him to bring a petition.

The appellants have seven days within which to serve papers against the State.

The Supreme Court may issue its determination in writing without any further hearing.

Both the High Court and the Court of Appeal have dealt with the matter to date.

Before the Court of Appeal, both Mr Walshe and Mr Lyons opposed applications by the State for costs to be awarded against them.

Both argued they had brought their applications in the public interest and because they believed the views of those opposed to same-sex marriage were not represented by the State during the referendum campaign.

However, the court awarded costs against both men.