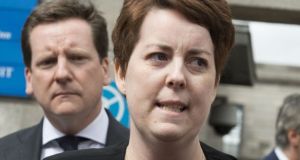 The Supreme Court will hear an appeal in November against a key High Court judgment in the case of terminally ill Ruth Morrissey.

The appeal will centre on what standard of care should apply in cervical cancer screening and whether the HSE has liability for acts and omissions of lab screeners but will also address other issues.

The Chief Justice, Mr Justice Frank Clarke, said on Friday the matter was urgent because of the implications of the High Court findings for other cervical cancer cases and the work of the Cervical Check tribunal.

There is no financial urgency for Ms Morrissey as the government has guaranteed, irrespective of the outcome of the appeal, she and her husband Paul will retain their €2.1m damages award, he noted.

Her counsel had properly drawn attention to the fact she is ill and an early closure to the case would be of benefit to her, he added.

The appeal is by the HSE and two labs, Quest Diagnostics Ireland Ltd and Medlab Pathology Ltd. All expressed concerns about the High Court’s finding screeners should have “absolute confidence” both about the adequacy of a slide sample and that a test result has no abnormalities before passing it as clear.

They say that introduces a standard in the relevant legal test for negligence that is incompatible with cervical cancer screening.

The findings were made by the High Court’s Mr Justice Kevin Cross in proceedings by the Morrisseys, from Limerick.

Ms Morrissey was diagnosed with cervical cancer in 2014 and her case related to cervical smears taken under the CervicalCheck screening programme in 2009 and 2012.

She was not told until May 2018 that a 2014 review showed two smears taken under the programme were reported incorrectly.

Earlier this week, three Supreme Court judges heard arguments concerning whether it should hear a “leapfrog” appeal, by-passing the normal route to the Court of Appeal.

Patrick Tracey SC, for the Morrisseys, argued the factual matters meant the appeal was more suited to the Court of Appeal but, if the Supreme Court believed it should hear an appeal, that should be confined to the standard of care issue.

Giving the court’s determination on Friday, the Chief Justice, with Mr Justice John MacMenamin and Ms Justice Iseult O’Mallley, said some issues sought to be raised involve questions of fact where the trial judge was said to have erred and it would not normally be appropriate to grant leave for a “leapfrog” appeal in a case like this.

The urgency of the situation required the court to depart from the general position whereby the appeal would first go to the Court of Appeal, he said. He noted the HSE’s focus was the “standard of care” issues and the extent to which it may potentially be primarily or vicariously liable for acts or omissions of the labs. Quest’s focus was on the standard of care issues and causation of Ms Morrissey’s cancer.

Medlab’s focus was on a finding a 2012 smear sample of Ms Morrissey’s assessed by it was inadequate and whether some of the damages awarded are not properly recoverable in cases such as this.

The matter is urgent because of the risk of further appeals if the same standard of care issues are considered in other cases, he said. There was also little doubt the tribunal would be significantly circumscribed in progressing its work if there remained doubt about the standard of care.

The interests of justice required the court to address various other issues raised by Quest and Medlab, he said.

The Morrissey side can reiterate in the appeal its arguments that the HSE cannot raise standard of care issues in the appeal as it had made no submissions on those in the High Court, instead leaving those matters to the labs there, he added. The appeal will run from November 4th to 6th.