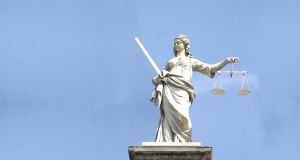 The seven-judge court’s decision on the appeal, which opens on February 21st, may affect the wording of this summer’s referendum on repeal of the Eighth Amendment

five women and one man – will represent the State in this month’s Supreme Court appeal potentially involving the courts’ widest-ever consideration of the extent of the unborn’s constitutional rights.

The court’s decision on the appeal, which opens on February 21st, may affect the wording of this summer’s referendum on repeal of the Eighth Amendment of the Constitution – article 40.3.3, giving the unborn an equal right to life to its mother.

The State will argue the High Court got it wrong in deciding the unborn has constitutionally protected personal rights, equivalent to those of an Irish citizen child, extending beyond the right to life in article 40.3.3.

Its core argument is that the unborn is not a “child” within the meaning of article 42A – inserted as a result of the 2012 children’s referendum – and its only constitutional right is the right to life as set out in article 40.3.3.

Any legal entitlements of the unborn are dependent, it says, on being born alive.

If the Supreme Court decides otherwise, that has wide-ranging implications for the rights of pregnant women, including their medical treatment, as well as for the functions of a range of agencies, the State believes.

Legal documents The Chief Justice, Frank Clarke, who is managing the exchange of legal documents for the appeal, will hold a further case management hearing on Tuesday to ensure the appeal is ready to proceed.

The lawyers who acted for the plaintiffs in the High Court case are opposing the appeal and will be represented by a team of four barristers, senior counsel Michael Conlon and Maurice Collins and junior counsel Paul O’Shea and Irene Fisher.

The case concerns a Nigerian man who came here in 2007, his Irish partner and their child, born in August 2015. The man, who was refused asylum and subsidiary protection and against whom a deportation order issued in 2008, is said to have two other children, one in Nigeria and one born here in July 2015 to an African woman.

His relationship with the Irish woman is alleged to have begun in September 2014. Their child was not born when the couple took proceedings aimed at preventing his deportation and seeking residency on the basis of his parentage of an Irish-born child. The child was not a party to the proceedings when they were initiated but was later joined to the case by Mr Justice Humphreys.

The State wants the Supreme Court to overturn a range of findings by the High Court judge, including that the words “child” and “all children” in article 42A include the unborn with the effect the unborn has constitutional rights extending beyond the right to life in article 40.3.3.

Article 42A affirms State recognition for the “natural and imprescriptible” rights of “all children” and provides the State “shall, as far as practicable by its laws, protect and vindicate those rights”.

The State is expected to challenge the High Court judge’s interpretation of findings and remarks of various Supreme Court judges as having accorded certain rights, including the right to litigate before birth, to the unborn.