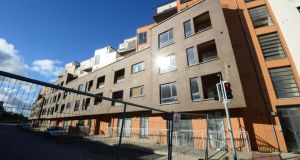 The long-running litigation over the Priory Hall apartment complex in Donaghmede, Dublin, which involved 41 families leaving their homes three years ago due to concerns over fire safety, has concluded with final orders being made at the Supreme Court.

The consent orders, read by Karen Denning, for the council, included an order vacating part of orders made by the president of the High Court, Mr Justice Nicholas Kearns, in October 2011 directing the council to assume responsibility for accommodation for the evacuated residents and the cost of storing their belongings.

On consent, the Supreme Court also made an order setting aside that part of the High Court order directing the council to make up any shortfall between the rent payable by tenants receiving rent supplement in private rented accommodation and the actual rent.

The council is also to pay the notice parties’ costs of the proceedings in the High and Supreme Courts, plus costs from the Priory Hall dispute resolution process chaired by Judge Joseph Finnegan, retired.

The five-judge court made the final orders in the council’s appeal related to the evacuation order which resulted in 41 families being housed in temporary accommodation at a cost of some €3 million to the council. The appeal had been adjourned several times to facilitate a mediation process.

The council last year undertook to redevelop the complex, built in 2007. It was initially believed that would cost €10 million but the costs are now estimated at €27 million.

The council has now decided to reconstruct the complex, including unfinished apartments, and offer them for sale. Properties owned by Mr McFeely will be sold to cover part of this cost.The owner-occupiers eventually had their mortgages written off last year following a two-year struggle. Under a resolution process, a group of 46 were given fresh mortgages to buy properties or have stayed in the private rented sector. Sixteen families without means to service mortgages or private rents are being housed by the Council. New homes have been found for 13 of them, with three remaining in temporary accommodation and waiting to be housed.