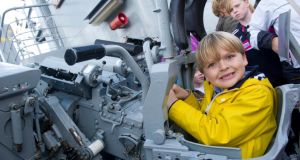 Dara Keane from Greenmount on the LE Aisling, one of the vessels to dock in Cork over the weekend.

A Russian naval corvette built with the collaboration of more than 70 companies was among the foreign vessels which docked in Cork over the weekend to take part in Rebel Week celebrations.

The RFS Soobrazitelny 531, which was unveiled in 2011, docked in Cobh for Cork’s contribution to the Gathering festivities.

The vessel carries an array of armaments including an Uran anti-ship missile system, an AK 630M surface-to-air artillery unit and an A190 automatic artillery system.

Commander Vladimir Malteev said the aim of the visit was to develop relations between Russian and Irish naval commands.

“It is the first time in modern Russian history that a Baltic fleet ship enters Ireland.”

The RFS Soobrazitelny was open to the public in Cobh yesterday afternoon.

The French ships Panthère and Lion, Belgian ships Primula and Stern and Ireland’s LE Eithne and LE Aisling were docked by the quayside in Cork city yesterday. They attracted large crowds on board.

The Naval Festival, which was organised as part of Rebel Week, involved one of the biggest gatherings of Irish and foreign naval vessels in Iri- sh waters in recent times.