Woman settles case against Londis over alleged slip on muffin

Retailer alleged Olivia Harte Lynch, who said she became an invalid after fall, author of own misfortune 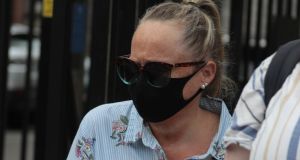 Olivia Harte Lynch is pictured outside the High Court where she sued for damages after slipping in a Londis store. Photograph: Collins Courts.

A woman who claimed she had become an invalid after slipping and falling in a Londis supermarket has settled her High Court action on undisclosed terms.

Olivia Harte Lynch (46), a law and business graduate and a working mother, was described by her lawyer as being a “shell of her former self” after allegedly slipping on a muffin.

Peter Bland SC, for Ms Harte Lynch, on Thursday said the case had been settled and could be struck out. He said Ms Harte Lynch was withdrawing her claim for loss of earnings. The terms of settlement were not disclosed.

It was claimed there was failure to remove the cake or muffin from the floor in order to ensure it would not constitute a trap or a source of danger.

Londis denied liability and contended that Ms Harte Lynch was the author of her own misfortune. It alleged she did not wipe her feet on entering the shop and failed to keep a proper lookout.

Jonathan Kilfeather SC, for Londis, said it was not being alleged by his client or the indemnifying insurance company that this was a staged or fraudulent accident.

When opening the case, Mr Bland said this slipping episode was life changing for his client, who had to have surgery and suffers from chronic pain syndrome since the fall.

Mr Bland said Ms Harte Lynch fell near the coffee area after entering the shop. When she got up , he said she saw what looked like cream and icing on the floor and thought it was a piece of chocolate from a cake.

He said Ms Harte Lynch told a member of staff at the deli counter what had happened and was told that ‘actually dear, it’s a muffin’.