Graduate in her 20s who weighs 30.8kg is described as at severe risk of death 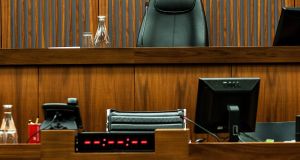 Mr Justice Peter Kelly heard the woman has intense feelings of self-hatred and has told doctors she is ‘not worth treating’. Photograph: Collins Courts.

The president of the High Court has described the case of a young woman with severe anorexia as perhaps the “most serious” yet to have come before the court.

A graduate aged in her 20s, the woman was described as in a state of “extreme starvation” and weighing 26.6kg when admitted to hospital in recent months.

She continues to resist tube-feeding and is extremely distressed about any weight gain, the court was told.

Mr Justice Peter Kelly heard she has intense feelings of self-hatred and has told doctors she is “not worth treating” and will stop eating as soon as she gets out of hospital. She had pulled out the tube a number of times and also sought to abscond but is so weak she was unable to.

Her case first came before the court last August when the HSE, in the context of an application to have her made a ward of court, sought orders for her detention in hospital for emergency tube-feeding and other treatment amid fears her condition was so critical she was at serious risk of death.

She went to hospital on a voluntary basis initially but was detained under the Mental Health Act after she resisted tube-feeding and sought to leave.

On the basis of her treating consultant’s view that, as a result of severe anorexia and an emotionally-unstable personality disorder, she lacks capacity to make decisions about treatment, the HSE sought an inquiry into her capacity with a view to have her made a ward of court. The HSE obtained orders for her detention in hospital and treatment pending that inquiry.

When Paul Brady BL, for the HSE, applied on Tuesday to Mr Justice Peter Kelly to continue the orders, the judge observed this was “perhaps the most serious” case of anorexia to have come before the court.

Mr Brady said it was “hard to imagine a more critical case”.

Counsel for the woman’s court-appointed guardian and her parents supported the orders.

Mr Brady said the “marked effects” of starvation on the woman’s condition were illustrated by the fact she suffered weight loss during a 13-hour interruption in nasogastric feeding after she pulled out the feeding tube and resisted efforts to reinsert it, the court was told.

She had to be sedated for the tube to be reinserted. Her weight before she pulled out the tube was 31.85kg and 30.6kg afterwards, the court heard.

There was some limited progress, including her good rapport with technicians, but her distress continues, counsel outlined.

There was no possibility of moving her to a specialist facility in the UK at this stage because the situation was critical.

In his ruling, the judge noted the woman weighs about 30.8kgs with a BMI of 11.9 when the normal BMI for someone her age and build would be 19. He noted the instances of the woman puling out the tube and that she is trying to eat half a Weetabix a day to get a break from tube feeding.

While the court has yet to receive a formal report from the court’s independent medical visitor who had assessed the woman’s capacity, it seemed the visitor apparently shared the treating doctor’s view of lack of capacity, he noted. He would continue the orders as her health and life are in danger given her low weight and resistance to eating and treatment, he said. The matter was returned to later this month.