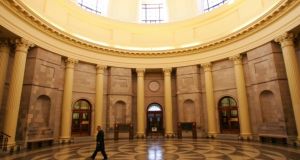 A clinically dead pregnant woman must be maintained on life support if the High Court finds there is a “real” prospect her unborn child will achieve viability outside the womb, lawyers representing the interests of the unborn have argued.

The Constitution requires the right to life of the unborn be vindicated where “practicable” and that right surpasses the right of a non-sentient woman to a dignified death, Conor Dignam SC submitted.

The family want the somatic treatment stopped so they may bury the woman, aged in her mid-20s and a mother of young children, with dignity.

She was pronounced clinically dead on December 3rd last, her condition is deteriorating and she displays puffiness of the torso, an open head wound, rotting brain, and also has several infections. A number of medical experts have said the prospect of the foetus surviving intact is small even if treatment continues.

On Christmas Eve, in submissions for the family, Mary O’Toole SC said it appeared unanimous among the clinicians who gave evidence, all of whom had “vast experience”, the prospect of this unborn surviving to viability, let alone birth is “small, almost negligible”.

In those circumstances, the 1983 ant-abortion amendment was not engaged, she argued. When Mr Justice Kearns remarked it did not seem to the court this is an abortion case at all, Ms O’Toole agreed and said both the woman and her baby would be dead were it not for medical intervention.

There was also an issue concerning the effects of the drugs being “pumped” into the mother, counsel said. It was not in the best interests of this unborn for it to be maintained in its current environment.

The best interests test should rest on the medical evidence, she said. The right to life of an unborn is the right to be born and the purpose of the 1983 amendment was to prevent anyone maliciously preventing that.

What happened here was “an act of God” where the child’s mother was stricken with this dreadful catastrophe, counsel said. The likelihood of bringing the child to viability is almost negligible so this course of treatment should not be continued, not just in the best interests of the unborn but of the woman’s family.

As a matter of “human decency and understanding”, the court could appreciate the position this family are in, counsel said. The woman’s father had not just had the nightmare of his child predeceasing him but he had also had to endure an “unimaginable level of suffering” watching her deteriorate in scenes “akin to a horror movie”

In his submissions for the unborn, Mr Dignam said the court’s decision whether maintaining somatic support was proportionate and justifiable would ultimately rest on the evidence as to the unborn’s prospect of achieving viability outside the womb.

The medical evidence showed as much as a 33 per cent chance the unborn may be delivered alive, he said. That, plus the fact the mother is no longer sentient “and feels no indignity”, meant the maintenance of somatic support was justified, he submitted.

Article 40.3.3 of the Constitution, the 1983 eighth amendment , “acknowledges the right to life of the unborn and, with due regard to the equal right to life of the mother, guarantees in its laws to respect and, as far as practicable by its laws, to defend and vindicate that right”.

If there was evidence to support a conclusion the unborn can achieve viability outside the womb, the court must, in vindication of the unborn’s right to life, refuse to allow withdrawal of the somatic treatment, counsel submitted.

The right to life of the unborn was engaged and it must be defended and vindicated as far as is practicable. The key consideration was what is practicable.

In this case, the mother’s life had passed and therefore was no longer a consideration in deciding what happened to this unborn, he said. That was a difficult concept for human beings as empathetic beings to process but it must follow from Article 40.3.3 there could not be equal rights between the mother and unborn once the mother’s life has passed.

There was also an issue regarding the mother’s right to dignity in death but that could not take precedence over the positive right to life of the unborn.There was therefore no balance between the mother and unborn’s rights that the court was required to consider.

Where there is a conflict between the two languages, the Irish version must take precedence and that has significant consequences of this case, he submitted. He considered the Irish language version gave a broader protection to the unborn. He was not contending that meant every possibility had to be pursued to the “nth degree” but the meaning of practicability must be imbued with possibility.

The test of “reasonable prospect” for survival of the unborn, as advocated by the HSE, was not appropriate here, he argued. The issue for the court to decide was whether there was a real possibility of survival of this unborn.

Cormac Corrigan SC, representing the interests of the woman, argued she has “no dignity” now. He also submitted there is sufficient indirect evidence for the court to infer she would have wished to have her life and death “dignified” by striving to have the unborn delivered “as a testament to her and as a sibling to her other children”.

That indirect evidence included she was a Roman Catholic and “a full time devoted mother” who was proud of this pregnancy, he said.

The court must also consider evidence it was not “impossible” to continue the somatic support until the unborn reached viability. The court should try and assess how the mother would exercise her own rights and what was in her bests interests now at this point of time.

Central to the issue of best interests was whether she was legally dead, he said. There was “some confusion” on the evidence when she was to be regarded as brain dead and there was no certificate with a date of death but the court did not have to decide that particular issue.

The medical evidence clearly showed the woman will not recover and is not suffering any pain. The evidence also showed, once the woman dies, her unborn also dies.

From the mother’s perspective, the withdrawal of somatic treatment now would be a deliberate interference with the unborn, he argued. If the woman could be maintained on somatic support for another ten weeks, there might “potentially exist” a reasonable prospect of a positive outcome.

The court had to consider her best interests and that the right to life involves a right to die “with dignity”.

Given the medical evidence, no-one could make the case this woman has any dignity, counsel said. There was no question of her being able to die with dignity and her present position was “as undignified as anyone could ever imagine”. In terms of her right to life, she has no suffering and cannot die with dignity, he submitted.

When Ms Justice Baker asked was there not a right to complete one’s death and to be laid to rest, counsel said, given where we are, the woman has “no dignity”. When Ms Justice Costello said that was “hardly an argument for continuing indignity”, counsel said the medical evidence was it was not impossible to continue the somatic support.

If the court concluded the woman would have wished to die with “minimum indignity”, then it could conclude the treatment should be stopped, he added. While there had been evidence this was “experimental” treatment, what was experimental for one may be pioneering for another and the court should consider if this was “a pioneering case”.

Gerard Durcan SC, with Eileen Barrington SC, for the HSE, argued the right to life of the unborn is engaged but the issue was the obligation to maintain that as far as practicable.

This was not a case about international statistics but this unborn and the body of this unfortunate woman, he argued. The test of practicability had to be applied according to the evidence in this particular case.

The HSE believed, based on the medical view there is no reasonable prospect the foetus will survive, the court should make orders allowing the somatic treatment be stopped, it was submitted.

The right to life incorporates more than the right to be alive and death is an intrinsic part of the right to life. The core issue was how to interpret the meaning of the principle of practicability in light of the obligation on the State under Article 40.3.3 to vindicate, as far as “practicable” the right to life of the unborn.

A crucial issue was to what extent it is possible to defend and vindicate the right to life of the unborn when the mother was pronounced brain dead at 14 weeks gestation, the HSE submitted.

The Supreme Court had ruled, in the case of a woman in a permanent vegetative state, the obligation of the State to preserve life is not absolute in the sense life must be preserved and prolonged at all costs, it was submitted.

In this case, the woman has no brain stem function and her other bodily functions remain in operation due to artificial means. Where a person is declared brain dead, it is lawful and in their interests to discontinue life.

The fact the artificial support for the mother was also maintaining the unborn child meant the court had to consider, if those measures were continued there was a realistic prospect the child will be born alive. The medical evidence was there was no such prospect, it was submitted.

In reply to Mr Dignam, Mr Durcan said he did not consider there was any major difference between the Irish and English language texts of Article 40.3.3. The Supreme Court had previously said the courts should not make orders which are futile when interpreting the article, he argued.

Ms O’Toole, for the family, agreed with Mr Durcan. The juxtaposition between “practicable” and “possible” had been previously addressed and the Supreme Court considered what was meant was what was “feasible” and “appropriate”. It was not a case of what can be done but what is practicable bearing in mind the outcomes, she said.