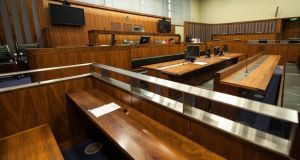 In High Court proceedings Chris Gordon also claims he was further defamed in an interview with the Irish Field in August 2014. File Photograph: Collins Courts.

The head of security of the horse racing regulatory body, the Turf Club, has claimed he was defamed in a letter about his role in an inspection of the yard of horse trainer Liz Doyle.

Ms Doyle is a daughter of former Fine Gael MEP Avril Doyle who was also present during the inspection, the High Court heard. Chris Gordon (60) is suing the Irish Race Horse Trainers’ Association (IRTA) over a letter to a senior steward of the Turf Club in which he says it was falsely alleged he (Mr Gordon) attempted to entrap Ms Doyle junior into an admission of wrongdoing.

The court heard the letter arose after Ms Doyle’s yard at Kitestown House, Co Wexford, was inspected in March 2014 by Department of Agriculture and Turf Club officials as part of an investigation related to the use of performance enhancing drugs in racehorses.

In High Court proceedings before a judge and jury, Mr Gordon also claims he was further defamed when the IRTA chairman Noel Meade, in an interview with the Irish Field in August 2014, said members were angered by the conduct of some officials during inspections carried out at horse trainers’ premises as part of this investigation.

Mr Meade claimed there was a “little Hitler syndrome” where trainers were treated almost as guilty from the start and they didn’t like being “treated like criminals”.

Mr Gordon, a former garda superintendent who became the security head following early retirement from the force in 2010, claims he was further defamed when the IRTA published a petition to its members seeking to have him removed as security chief on grounds of misconduct.

It is further alleged IRTA committee member Michael Grassick made false claims about Mr Gordon’s conduct during inspections of two other trainers’ premises.

Mr Gordon says, as a result, the Turf Club, now known as the Irish Horse Racing Regulatory Board, held an inquiry which concluded Mr Gordon had done nothing wrong.

He claims the allegations were made with malice and meant, among other things, he engaged in unprofessional behaviour, corrupt practices and abused his position.

The IRTA denies the claims.

It also pleads qualified privilege which protects a statement published to someone with an interest in receiving such information as long as it is not motivated by malice.

Opening the case, Tom Hogan SC, instructed by Sean Costello Solicitors, said the inspection of Ms Doyle’s yard was the first of a number after the Turf Club and Department of Agriculture decided to share intelligence to carry out investigations into the use of anabolic steroids in the industry.

It followed the conviction in 2013 of John Hughes, a retired department vet, for possession of 6kg of Nitrotain at his Carlow home.

Using the book of evidence in the case against Hughes, Turf Club and department officials went over a number of documents provided by Hughes, counsel said.

Some of the information related to bank lodgment payment slips and beside those payments were the initials of people, he said.

During the meeting with the officials, Turf Club chief executive Denis Egan saw one payment of €200 beside an initial “LV”. Mr Egan wrote in the margin of the book of evidence “Liz Doyle” with a question mark beside it after it was suggested it might be her, counsel said.

On March 26th, 2014, an inspection took place of Ms Doyle’s yard when she and her mother asked to see the bank lodgment slip.

Mr Gordon showed them the page in the book of evidence but he did not know at that time that Mr Egan had written in “Liz Doyle” in the margin. Ms Doyle denied the entry referred to her and this was accepted. The inspection ended otherwise uneventfully, counsel said.

Afterwards, Ms Doyle complained about what had happened to Mr Gordon. Her mother also contacted Mr Egan and she did not accept his explanation he had handwritten the name in, counsel said.

1 Coronavirus: More ‘striking’ evidence BCG vaccine might protect against Covid-19
2 Meet the Irish woman leading New Zealand’s Covid-19 response
3 Coronavirus: Start date for more than 100 contact tracers delayed by 11 days
4 This time, the future of the euro really is at stake
5 Coronavirus Q&A: What new powers have the gardaí been given?
Real news has value SUBSCRIBE