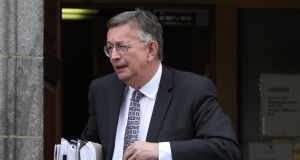 Solicitor Gerald Kean pictured at the Four Courts on Tuesday for the opening day of his High Court action. Photograph: Collins Courts

Solicitor Gerald Kean has told a High Court jury he was “shell-shocked” by a front page newspaper article concerning a visit by members of the Criminal Assets Bureau to his Dublin office three years ago.

Mr Kean has sued for defamation alleging, among various claims, the March 11th 2016 article in the Irish Daily Star, labelled “Exclusive” and headlined “Kean caught up in CAB probe”, wrongly and maliciously linked him to gangland crime and to the Kinahan crime gang.

The jury heard the sub-headline on the front page article said: “Gardaí call to office of ‘celebrity solicitor’ for file” and the story also stated: “Sources said officers were looking for paperwork relating to the sale or purchase of a house linked to the Kinahan gang.”

The story ran for another two pages inside the newspaper, saying, inter alia, that, “as part of their probe into the Kinahan cartel, gardaí obtained judicial permission to search 12 homes and seven businesses, including Mr Kean’s office”.

It also said “it is understood Mr Kean fully co-operated with the gardaí who called to his office”.

Mr Kean has sued Independent Star Ltd over the article, published a day after two CAB officers called to his premises at Upper Pembroke Street, Dublin. The defence denies defamation and denies the article means what Mr Kean alleges.

In evidence on Tuesday, Mr Kean said there was no “raid” or “search” of his premises by CAB members on March 10th 2016.

He said his office represents several gardaí, including CAB members, and, when two members of CAB called to his office that day, he assumed they might be potential new clients.

He said, following a “lovely” conversation with the two about a range of matters including his late father, who was a garda, they asked him for any documents concerning a house purchase by a Dublin man, Sean McGovern.

Mr McGovern was described in the newspaper article as aged in his thirties and a business partner of Liam Byrne, who was shot and wounded during an incident at Dublin’s Regency Hotel when David Byrne was shot dead.

The article said the homes of Mr McGovern and of Liam Byrne were raided earlier the same day, March 10th 2016.

The article also said gardaí took away documents from Mr Kean’s office concerning the sale or purchase of a property at Kildare Road, Crumlin.

Mr Kean said he was unaware himself of the house purchase matter but another solicitor in his office told him she had acted in that matter and procured the relevant documents for the CAB officers.

Because the officers had a warrant, that meant, despite confidentiality obligations as a solicitor, the documents must be provided, he said.

At his Co Wicklow home that night, he was watching a football match when he was contacted several times by phone by journalists with the Star. He may have used an “expletive” when he “very abruptly”, in reply to a specific question from a journalist, said there was no “raid” on his office and had not answered further calls and texts.

He was “shell-shocked” and “absolutely devastated” when, while later watching an item about the following day’s newspapers headlines on the Virgin Media Tonight show, he learned the CAB visit was the subject of a front page article in the Irish Daily Star.

Because he knew he would be unable to sleep, he drove to Dublin in the early hours seeking a copy of the newspaper. When he read the full article, he was horrified and went to the office of solicitor Simon McAleese about it.

He was very concerned how people, particularly his daughter, but also various charities and businesses with whom he is involved, would react to the article and whether they would believe he had no involvement in relation to the matters CAB was investigating.

“I was genuinely very upset and very hurt and I really feared how I would recover from this,” he said.

Earlier, outlining the case for Mr Kean, Jim O’Callaghan SC, urged the jury to award “very significant” damages, including aggravated damages, due to the “viciousness” of this “defamatory attack”.

He said the jury may be aware of a very serious murder at the Regency Hotel on February 5th 2016 as that was the most prominent factor leading to a “murderous” feud between the Hutch and Kinahan criminal gangs.

The article referred to CAB getting permission to search 12 homes and seven businesses but the only business named was Mr Kean’s and only it got this “extraordinary” treatment in the newspaper, he said.

The newspaper was linking all of the CAB searches together and putting Mr Kean in the same category as those subject to the CAB investigation which is “totally incorrect and unfair” to him, he said.

The article amounted to a “grave defamation” of Mr Kean and meant he knowingly facilitated gangland activity through his profession as a solicitor, he said. Mr Kean also believes gardaí were the source of the information in the article, counsel added.

The case continues on Wednesday before Mr Justice Bernard Barton and a jury.