Shatter should be ‘vindicated’ over Guerin report conclusions 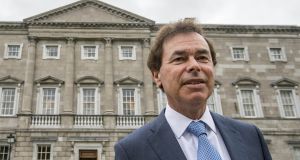 The Court of Appeal has said it is for the government to decide how to respond to findings that “seriously damaging” conclusions in the Guerin report were made in a manner that breached the former Justice Minister Alan Shatter’s rights.

If the government does not respond to any applications by Mr Shatter arising from the court’s fidnings, or if he is disastisfied with its response, he can return to the court, all three judges said.

All three agreed Mr Shatter was entitled to costs of the case against Mr Guerin and to a declaration the disputed findings in the May 2014 report were reached in a manner that breached his rights to fair procedures and natural and constutitional justice.

They also agreed it was not open to the court to make orders against Mr Guerin, as Mr Shatter sought, quashing the disputed parts of the May 2014 report and requiring Mr Guerin to amend it.

Those issues were a matter for negotiation between Mr Shatter and the government which had commissioned the report, Mr Justice Ryan said.

It would be a “hollow victory” for Mr Shatter if he merely got a declaration the findings were reached in breach of his rights without any amendment of the report as it currently stands on the public record, he said.

It would be “unjust and unreasonable” to allow “objectionable” conclusions about Mr Shatter stand in the report unaffacted by the appeal court’s decision in his favour, he said.

The court considered Mr Guerin had no further role in this matter as his report had been provided to the government and it was for the State to address the situation. There was no reason to suppose the State will not wish to vindicate Mr Shatter’s good name, Mr Justice Ryan said. It was possible to delete the relevant parts and still leave the report in a condition that “makes sense”.

The court made final orders on Thursday following its judgment last November allowing Mr Shatter’s appeal against the High Court’s rejection of his challenge, brought against Mr Guerin only, to the report.

A stay applies on the orders to allow Mr Guerin an opportunity to consider whether to seek a Supreme Court appeal.

In her judgment, Ms Justice Finlay Geoghegan said Mr Shatter brought this case against Mr Guerin alone, after Mr Guerin had delivered the report to the government and when the report was under government control and published by it.

While Mr Shatter’s submissions about the impact of the report on his good name were understandable, the court should not express a view on the obligations of others, not parties to the case, concerning the report.

Ms Justice Irvine said it was “not practicable” to make orders against Mr Guerin requiring him to amend his report, given to the government after this case was taken. She was reluctant to express a view on the government’s obligations, she added.

In its judgment last November, the Court of Appeal ruled Mr Shatter’s constitutional rights were in jeopardy by reasons of the conclusions Mr Guerin was proposing to include in his report and Mr Shatter should have been permitted to respond before the report was given to the Taoiseach who later published it. Mr Guerin was obliged to observe the rules of natural justice and there was a breach of those rights because of the “defective” procedure adopted, it held.

Mr Shatter resigned from the Government in May 2014 as a direct result of the Guerin report’s findings.