School board ‘kept in dark’ about land sale by Christian Brothers 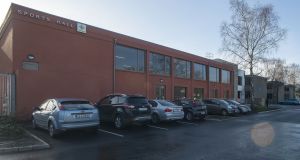 The board of managment of Clonkeen College has begun legal action against the Christian Brothers to prevent the sale of its playing fields. Photograph: Dave Meehan/The Irish Times

The board of management of a Dublin secondary school was “kept in the dark” about plans by the Christian Brothers to sell part of its playing grounds to a developer for €18m, the High Court has been told.

The board of management of Clonkeen College, Deansgrange, has brought proceedings against the Christian Brothers congregation, which set up the school, aimed at retaining the playing fields for as long as the school remains in operation.

The congregation denies claims the proposed sale will adversely affect the 520 pupil school.

Opening the case on Friday, James Dwyer SC, for the board, said it was “rather controversial” and had been brought so the playing fields would remain available for the school and its students.

The board “knew nothing” of, and was “kept in the dark” about, the €18 million deal under which a local builder, Patrick Durkan Senior, is to acquire a very significant portion of the playing fields, about seven acres, from the congregation, he said.

The board was only informed of the deal for commercial reasons in May 2017 and was told the sale was going ahead, counsel said. “A PR company was paid €10,000 to break the news to the board about the sale.”

In previous years , the board raised had funds to improve all its facilities including the playing fields, he said. The congregation, and the Edmund Rice Schools Trust (ERST), which in 2008 became the patron of the school premises, knew about and consented to that, he said.

More than €450,000 spent on improving the playing fields had been “wasted” as those facilities would be “bulldozed” and “torn up” as a result of the proposed sale, he said

Under the proposed sale, the school will receive €1.3 million and retain one small area of the existing playing fields for use as a playing pitch, which it does not believe is suitable for its needs, counsel said.

The board also says the proposed plans will adversely affect its special education needs unit.

In its action, the board, which has managed the school since 1998, claims the sale breaches a 2006 agreement with the congregation.

It claims it was agreed the playing fields would remain available for the school and that another part of the lands, known as the extended monastery site, would be sold for development.

It wants a declaration that the students of Clonkeen College are entitled to continued use of the playing fields as long as the school remains in operation.

It claims the only portion of the lands the congregation is entitled to develop is the monastery site.

It wants orders restraining disposal of the playing fields and requiring the 2006 agreement be specifically performed.

It says it has entered into binding contracts to sell the lands and intends to make significant charitable donations from the sale.

The case continues next week before Ms Justice Carmel Stewart.