Court case recommences against development board and building firm 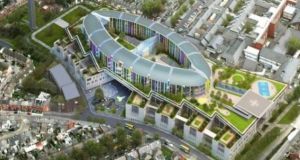 High Court proceedings brought by residents who claim their homes have been damaged by construction work on the National Children’s Hospital in Dublin have recommenced.

In 2017 residents from the O’Reilly Avenue, Ceannt Fort and Mount Brown areas of Dublin 8 sued the National Paediatric Hospital Development Board and BAM Civil Limited, the firm building the hospital

The residents – who live close to St James’s Hospital, where the new €1 billion children’s hospital is being built – claimed their homes have been damaged as a result of certain works being carried out by the defendants.

They had sought orders including an injunction preventing works being done on the site until steps are taken to remediate and protect their property from sustaining any further damage.

The application was opposed by both BAM and the Hospital Development Board.

Following negotiations between the sides, the proceedings were resolved on undisclosed terms.

On Wednesday lawyers for the residents returned to the High Court and were given permission on an ex parte basis by Ms Justice Leonie Reynolds to serve short notice of their proceedings on the defendants.

John Rogers, SC for the residents, said his clients were again bringing proceedings over the effects on homes caused by construction work on the new hospital.

Counsel said engineering reports had been conducted on behalf of his clients. This evidence counsel said has shown that there has been “movement” to their houses.

Mr Rogers said there had been lengthy correspondence between the parties, but that his clients’ concerns had not been addressed to their satisfaction and an impasse had been reached.

Counsel said he hoped that by recommencing the proceedings the parties might try and resolve their difficulties.

The judge, noting the concerns raised by the defendants and their frustration about how matters had progressed between the parties, said she was satisfied to make the order sought.

The matter was made returnable to Friday’s sitting of the court.